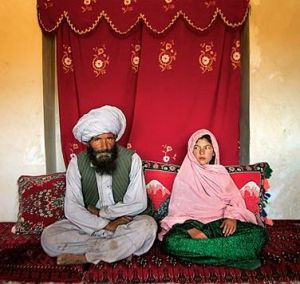 Ghulan Haider, 11, married Faiz Mohammed, age 40. She hoped to become a teacher but was forced to quit her classes upon engagement. Image from the New York Times Magazine.

Child marriage in the Quran

Aisha (‘Ā’ishah, c. 613/614 –c. 678)[1] or عائشة, (also transliterated as A'ishah, Aisyah, Ayesha, A'isha, Aishat, or Aishah) was married to Muhammad at the age of 6 or 7, and the marriage was consummated by Muhammad, then 53, at the age of 9 or 10 according to numerous sahih hadiths.[2][3][4][5][6] Due to concerns about child marriage this topic is of heavy interest in modern apologetic literature and public discourse.

Marriage at a young age was not unheard of in Arabia at the time, and Aisha's marriage to Muhammad may have had a political connotation, as her father Abu Baker was an influential man in the community.[7] Abu Bakr, on his part, may have sought to further the bond of kinship between Muhammad and himself by joining their families together in marriage via Aisha. Egyptian-American Islamic scholar, Leila Ahmed, notes that Aisha's betrothal and marriage to Muhammad are presented as ordinary in Islamic literature, and may indicate that it was not unusual for children to be married to their elders in that era.[8]

Revisionary disputations on her age

The age of Aisha was not disputed by earlier scholars but a surge of some modern Islamic scholars have made attempts to advance the idea that Aisha was older than nine lunar years at time of the consummation of her marriage to Prophet Muhammad. Sahih hadiths of Aisha's own testimonies are taken to be mistaken, and indirect sources and disputed dating techniques are used to calculate different ages. These diverse techniques have led to several conflicting ages to be proposed for Aisha at the time of consummation, including 12, 14, 15, 17, 18 and 21 years of age.

These revisionary perspectives can be broadly categorized into five categories, including those that: (1) discredit Hisham ibn Urwah and the Iraqi narrators, (2) use non-sahih information to overturn otherwise sahih hadiths, (3) use indirect evidences in preference of direct testimonies, or (4) use ‘loose' dating and aging in preference to specific dates and statements of age. These revisionary approaches are, however, generally not accepted by mainstream Islamic establishments.

Revisionary disputations on the word "consummate"

Main Article: The Meaning of Consummate

In a hadith in Sahih Bukhari, Aisha says that she was married to Muhammad at the age of six and that Muhammad consummated the marriage when she reached the age of nine. The implications of this and similar hadiths have recently been contested by some modern Islamic scholars who attempt to advance the idea that the verbiage used in this hadiths does not in fact refer to sexual consummation. While such a reading has no historical/linguistic or traditional precedent, it has nonetheless achieved some popularity. However, these re-readings, like those re-readings which attempt to advance a different age for Aisha, have generally not been accepted by mainstream Islamic establishments.

The terms used in the hadiths are udkhilath and bana biha, and these words do not permit any meaning other than "engaged in sexual intercourse with her" in the contexts where they are used. Crucial to the facilitation of asexual re-readings of these passages are tendentious English translations (particularly those of Dr. Muhsin Khan) as well as a general and perhaps understandable unwillingness to admit that Muhammad could have slept with or raped a nine year old.

Due to the commonplace nature of child marriage in the 7th century (both inside and outside of Arabia), many of Muhammad's companions (sahabah) also engaged in child marriage. Most notable among these were Umar b. al-Khattab (the second "rightly guided caliph"), who married Umm Kulthum when she was between 10-12 (although some sources report she was just 5[9]), and Ali b. Abi Talib (Muhammad's cousin and the fourth "rightly guided caliph"), who married Fatima (Muhammad's daughter) at the age of 9.

In the Muslim world today

Child Marriage in the Muslim World

Due to the legality of child marriage in Islamic law, child marriages are still permitted and practiced in many Islamic countries - and where the practice is prohibited by civil law, such marriages are sometimes carried out by independent Imams who allege to be loyal to the Sharia alone. In these countries, child marriages are especially common among rural populations where girls well below the age of puberty may be wed by their guardians to older men to various ends, including the preservation of the family and girls' 'honor'.

Islamic child marriages are most common Pakistan and Afghanistan, followed by countries in the Middle East and Bangladesh.[10][11] This practice may also be prevalent to a lesser extent amongst other Muslim communities, and has even been observed among the Muslim populations of non-Muslim countries, such as the United Kingdom[12] and the United States.[13]

In countries including Yemen, Bangladesh, Iran, and Northern Nigeria, attempts at reforming laws and banning child marriages have been opposed and stopped on the grounds that such a ban would be un-Islamic.[14][15][16][17][18] Malaysia has even passed new laws which explicitly allow for the practice of child marriages among Muslims on religious grounds.[19]

And those who no longer expect menstruation among your women - if you doubt, then their period is three months, and [also for] those who have not menstruated. And for those who are pregnant, their term is until they give birth. And whoever fears Allah - He will make for him of his matter ease.

Quran 65:4
The `Iddah of Those in Menopause and Those Who do not have Menses Allah the Exalted clarifies the waiting period of the woman in menopause. And that is the one whose menstruation has stopped due to her older age. Her `Iddah is three months instead of the three monthly cycles for those who menstruate, which is based upon the Ayah in (Surat) Al-Baqarah. [see 2:228] The same for the young, who have not reached the years of menstruation. Their `Iddah is three months like those in menopause. This is the meaning of His saying.

Exegesis on (Qur'an 65:4)
Tafsir Ibn Kathir
And [as for] those of your women who (read allā'ī or allā'i in both instances) no longer expect to menstruate, if you have any doubts, about their waiting period, their prescribed [waiting] period shall be three months, and [also for] those who have not yet menstruated, because of their young age, their period shall [also] be three months - both cases apply to other than those whose spouses have died; for these [latter] their period is prescribed in the verse: they shall wait by themselves for four months and ten [days] [Q. 2:234]. And those who are pregnant, their term, the conclusion of their prescribed [waiting] period if divorced or if their spouses be dead, shall be when they deliver. And whoever fears God, He will make matters ease for him, in this world and in the Hereafter.

Narrated Hisham's father: Khadija died three years before the Prophet departed to Medina. He stayed there for two years or so and then he married 'Aisha when she was a girl of six years of age, and he consumed that marriage when she was nine years old.

Sahih Bukhari 5:58:236
Narrated 'Aisha: that the Prophet married her when she was six years old and he consummated his marriage when she was nine years old, and then she remained with him for nine years (i.e., till his death).