This article defines the scope of WikiIslam, to assist editors and volunteers in understanding the nature and limits of WikiIslam. The article relevance section of this article and the flowchart included therein give more detailed guidance as to how one can determine whether or not an article or a body of content have a home on WikiIslam.

According to the site's mission, WikiIslam aims to provide accurate and accessible information from traditional and critical perspectives on the beliefs, practices, and development of Islam.

For WikiIslam, Islam is the religion of every recognizable group of people, both historical and present-day, who have called or who do call themselves as “Mu’min”, or believers. Today, these people commonly identify as “Muslims”.

WikiIslam recognizes that “Islam” likely had an extremely different meaning at the beginning of Islamic history than it does today, and even today it means many different things to different people. Therefore, WikiIslam will not mark the line between a “true” Islam and a “false” Islam.

Instead, it categorizes the beliefs and practice of every recognizable group of people who have called themselves Muslim, including those 7th-century persons whose movement would one day evolve into what is now called “Islam.”

For WikiIslam, “religion” means the set of metaphysical beliefs about the supposed supernatural nature of the universe that humans live in as well as the nature of the supernatural beings which supposedly create, order, inhabit, control and influence it, and their supposed wishes for mankind.

As an extension of this definition, discussion of religious philosophy may be included in the Wiki.

There are, broadly speaking, two approaches to the history and development of Islam: that of various Islamic authorities, with their so-called “traditional narrative”, and that of many modern historians, whose approach can be described as both “critical” and “integrative”.

The traditional narrative consists of the often evolving official narratives advanced by the major sects of Islam. Their tasfirs, hadith, sira, and various other forms of commentaries and historical writings are included within the scope of this Wiki.

The modern, historical-critical approach consists of these documents and also non-Arabic, non-Islamic primary sources, including archaeological evidence, which provide further information on the formative years of Islamic history. These sources are by and large much closer in time to the events they describe than the Islamic sources, but occasionally fragmentary. WikiIslam deals with both, seeing them both as vital to an accurate understanding the nature of Islam and its history.

WikiIslam deals with the history of Islam only as it relates to the beliefs of Muslims and their development.

Historical questions about issues like the actions of the governments of Muslim peoples, particularly those that directly invoke Islam to justify their actions, are included to the extent that they relate to the matter of how Islam is practiced at a societal level.

Governance by Muslim leaders and political struggles whose main functions were not religious remain outside the scope of this wiki. General Muslim relations with non-Muslim governments and associated military struggles likewise remain out of scope, unless, as stated above, these developments relate in some direct way to the beliefs, practices, and development of the Islamic faith.

Specific arguments of Islamic apologists are discussed only far as they have become widespread beliefs within the Muslim world.

According to its mission, WikiIslam aims to provide accurate and accessible information from traditional and critical perspectives on the beliefs, practices, and development of Islam. For this reason, the quality of the site’s content is a huge concern, and WikiIslam gives great care both to what is included and excluded. Islamic scholars have traditionally claimed that Islam is an all-encompassing way of life, and that everything from how one sleeps, keeps their hair and operates their government can and should be governed by its rules. The scope of what might be called “Islamic” is thus truly vast, and the mantle of Islam has been claimed for every intellectual movement under the sun, from fascism to communism to feminism. It is thus imperative that editors keep their focus firmly on the intended subject matter—the theological beliefs of Islamic scholars and laity and the history thereof. If the wiki deals with elements of history, philosophy, politics, or apologetics far outside the scope of these subjects, the form and focus of the wiki would be lost. For this reason, when thinking about creating a new article on the Wiki, the following questions should be asked of the subject matter of the article before it is even created:

The following flowchart should give clear, step-by-step guidance to those who remain unclear as to whether or not their article/content belongs on the wiki. 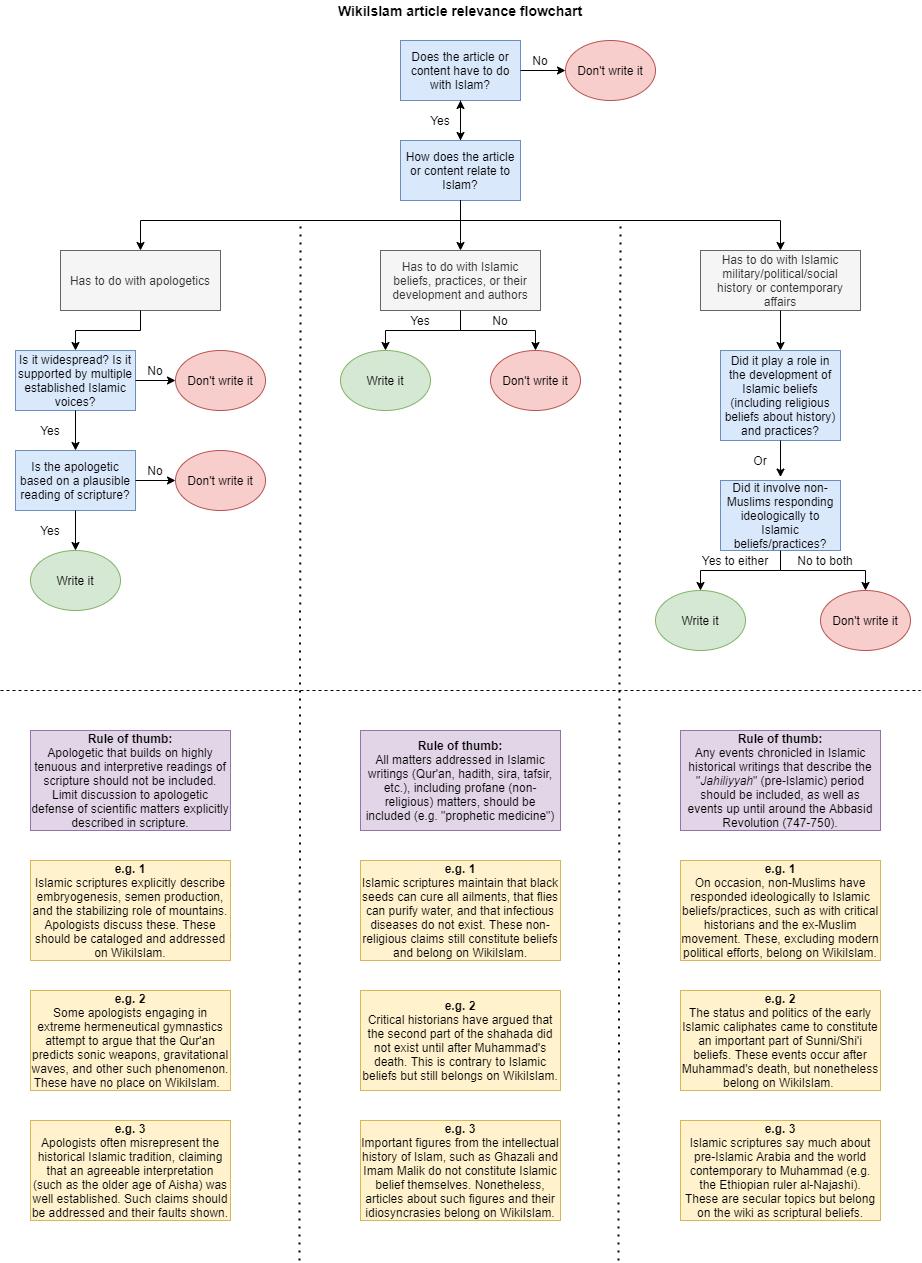