From WikiIslam, the online resource on Islam
< WikiIslam:Sandbox
Jump to navigation Jump to search 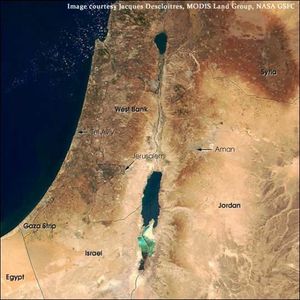 Islamic apologists attempt to claim that the “lowest spot on earth” is correctly identified by the Qur’an in one of many miraculous displays of scientific precocity in text.

It is from the eve of sura Ar-Rum (The Romans):

30:2 The Roman Empire has been defeated-

YUSUF ALI: In a land close by (أَدْنَى); but they, (even) after (this) defeat of theirs, will soon be victorious-

PICKTHAL: In the nearer land, and they, after their defeat will be victorious

SHAKIR: In a near land, and they, after being vanquished, shall overcome,

as the word near أَدْنَى can also be translated as "lower" and hence the above could be read: "The Roman Empire was defeated in the lowest land". Then they claim that since the Dead Sea is it the lowest point on Earth Muhammad said something that no one could have known.

The claim of apologists involves many arguments. They start with this lingual argument:

So the quran described the place of the Roman-Sassanian war as the lowest land on earth.

Then they use this conclusion as a premise in a historical argument to prove what that place was, then in a geographical argument to prove that place as truly the lowest spot on earth, then they come with a historical claim that none could know that at the time of Muhammad with natural methods, then it is supposed to be a miracle for him to know that, so there must be a supernatural intervention.

We shall stop here for a moment to examine this lingual argument. It is clearly an invalid argument. Its obvious invalidity in reasoning comes from the second premise, which says that the word adna "can mean" lowest. It does not "necessarily mean", it just "can mean". Yet we have another meaning which is "nearest", so how we "know" for sure which translation was meant by the author? We simply can't, and the argument unfortunately does not help us in doing so, the argument does not prove its conclusion at all.

It is a fundamental of logic that the argument to be valid, it must necessarily prove its conclusion, yet a presence of a counterexample (a possible situation in which the premises are true and the conclusion isn't) will always render the argument invalid, an unproven assertion, in our situation, the two premises still can be true while the conclusion is not true, simply if Muhammad only meant "nearest" , as all commentators and translators has understood all over the time, and among them there was prominent experts in the Arabic language .

So, first of all, Muslims have to prove that the Quran's writer "necessarily" meant "lowest" when he said "adna", since its more obvious meaning is "nearest", and that's because, having another and a more obvious meaning of the word, used by all translators. The lowest point miracle is a counterexample which makes it impossible to prove that the writer "necessarily" meant "lowest"! it is just a possibility, actually an improbable one!

It's improbable because the writer could say it plainly, in non-equivocal statement, obvious for any one to notice, instead of no one in the whole 14 centuries.

In this case we can say that it is a re-interpretation after the discovery, dependent upon equivocation, which is easy to do in a rich-semantic language like the Arabic language with any text. In the same way find variable different meanings of the Quranic words that renders the Quranic statements erroneous, would they then accept that the Quran is false? Or would they immediately appeal to counterexamples (other equally valid meanings), or even to metaphors?

Actually, in many other cases, the obvious meaning of the Quranic words render the verses false, and Muslim apologists then appeal to improbable counterexamples to save situations, if not found, metaphors are always present to save situations.

But shall we be pure agnostics regarding what is the real meaning of the word? No, Occam's razor which is a principle of parsimony, economy, or succinctness used in problem-solving, states that among competing hypotheses, the hypothesis with the fewest assumptions should be selected. It tells us that our suppositions should not go beyond the need,we should seek simplicity,so if we have two explainations for something ,equal in the explanatory power, the explanation that postulates less unproven assumption is the one we should accept.

Generally in the discussion about miracles in the Quran, the two explanations differ in the number of suppositions they postulate, apologetic one implies a miraculous case in which there is a supernatural intervention, consequently implies a whole supernatural world ,there is a population in heavens then ,god,angels,gardens,hell also ,resurrection,judgement,satan,winged donkeys are true things, also all the quranic miracles of the prophets occurred, mouses split the sea, jesus created real birds by the mud, a she-camel was born from a rock .. etc .. endless list of supernatural stuff, truly this is the most extraordinary claim in the world, so it requires the most extraordinary evidence in the world, but what we have ? , an invalid argument ! to accept all this exceptional metaphysics, what they provide as exceptional evidence ? an unproven assertion ! how great !! truly it's an exceptional evidence , why we do object ?!

This clear logical stupidity follows directly from ignoring occam's razor, that the other explanation postulates nothing special, he was just a man of his time, saying what everybody else could say, what could be more simpler , with equal explanatory power since the two meanings of the word _in most of cases_ are equally valid .(for this case im going to show that even if he meant "lowest land" it is not a miracle).

However there is no room for all of this since the lingual argument is unsound .. the second premise is false ..

The word "adna" in the Arabic language has nothing to do with meaning "low in elevation" it can mean "nearest" , "vile" , "less" and "cheap", it can mean low distance in between, low value of a thing, or low price, low position of a man,or low morality, but it HAS NO THING TO DO WITH "low elevation of places" meaning, it is similar meaning as obvious, but SEMANTICS IS NOT PROVED BY SUCH SIMILARITY. To prove that Muslims must mention a NATIVE LITERATURE using the word adna in the meaning of "low elevation of land".

The meaning "lowest" may be felt in the modern use of the word only, NO OLD DICTIONARY at all states the claimed "low elevation of a land". There is NO OLD USE in that meaning too.

There is no single mention to the meaning "low in elevation " at all .. and the most special dictionary among them is (maquaiees al-loghah i.e.the standards of language) dictionary, which states that :

Here is the translation of this one ..

"dana or danawa are the same root means "near" and this is the standard meaning to consider in understanding the meanings of its derivatives ..

then he states that ..

(donia) means (this life) or (this world) .. because it is nearer to us than the afterlife ..

(dani) is the weak man, or the vile man, or the mean man, because his position is near to reach i.e not a position which is beyond reach .

in the other dictionaries we find :

(adna) the first one, because it is nearer to you than the last one .

(adna) (cheap ). because its price is in hand, not beyond reach.

There is no single mention in an "OLD" dictionary to the meaning "low elevation land" at all .. asserting that it do mean "lowest" is a fallacy of equivocation, it abuses the word since that is not a genuine use of the word in the time of mohammed.

For full english explanation of the word you can read ..

please search for any single mention of low elevation land !

This lingual argument is unsound and invalid. 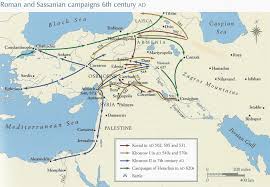 The second point here is the historical claim ..

The quran did NOT talk about the basin of the dead sea, actually it talked about the place of the Roman-Sassanian battle, where was this? None on the basin of the dead sea, list-of-all-roman-persian-wars-battles, the nearest to it was a battle in Adhri'at other one was in Jerusalem, both cities are above sea level, Dead Sea is roughly 1000 (or approximately 1,373) feet below sea level, Jerusalem, however, is roughly 2500 feet ABOVE sea level, so who ever adopt the "lowest land" meaning, he has basically proven that Muhammad was a false prophet since he mistakenly assumed that Jerusalem was the lowest part of the earth! Yet, we have more to say about this here.

The third point here is about whether the basin of the dead sea is really the lowest spot on earth ?

Lowest point (natural) The lowest known point is Challenger Deep, at the bottom of the Mariana Trench: 10,911 m (35,797 ft) below sea level.[3] Only three humans have reached the bottom of the trench: Jacques Piccard and US Navy Lieutenant Don Walsh in 1960 aboard Bathyscaphe Trieste and filmmaker James Cameron in 2012 aboard Deepsea Challenger.

The lowest point on land not covered by liquid water is the valley under Byrd Glacier, which reaches 9,120 feet (2,780 metres) below sea level. It is, however, covered by a thick layer of ice. See the extremes on Earth page.

The lowest point on dry land is the shore of the Dead Sea, shared by Israel and Jordan, 418 m (1,371 ft) below sea level. See List of places on land with elevations below sea level

So it is the lowest point on the "DRY" land, lower points exist put covered with ice.

As mentioned above the dead sea basin is the lowest point of dry land, 3 times lower than the next low point:

That is exactly what happened, since the region of ( modern-day Lebanon, Israel, Palestinian territories, the western part of Jordan and southwestern Syria ), exactly the surroundings of the dead sea, was a Semitic-speaking region in the Ancient Near East, called Canaan and the word Canaan :

has an original meaning of "lowlands", from a Semitic root knʿ "to be low, humble, depressed"

So what we have here, if we accepted the "lowest land" meaning of the quranic verse, it is nothing but a translation of the name of the region from the language of its local people into Arabic, without any need for a supernatural intervention, what is supernatural in translation!

This is always happening, in Hawaii island, the largest volcano on "dry land" exist, no surprise it is called in the local language Mauna loa i.e "the long mountain", a miracle?!

1- The word "adna" dose NOT mean "low elevation land" at all, in any OLD dictionary, it only means "nearest" , "vile" , "less" and "cheap" ,asserting that it do mean "lowest" is a fallacy of equivocation, it abuses the word since that is not a genuine use of the word in the time of mohammed.

2-Even if it can mean so, it cant be proven that mohammed meant "low elevation" since other meanings are counterexamples that render the argument invalid, the meaning "lowest" then, as a possibility is dismissed by occam's razor, it postulates to much assumptions without need for them.

3 - The place of the roman_sassanian battle is NOT dead sea basins, it is Jerusalem (2,490 ft) above sea level . So who ever adopt "lowest land" meaning, he has basically proven that Muhammad was a false prophet since he mistakenly assumed that Jerusalem was the lowest part of the earth!

4- The arena of the battles is a region called in its people's local language "canaan" literally means "lowlands" so if we accept the meaning "lowest", it is no thing more than a translation of the name of the region into the arabic language, this explanation is far better since it is very natural and has a higher explanatory power and precision, it is not an error like number three point, but it has only a problem with number one and number two points (in conclusion ).