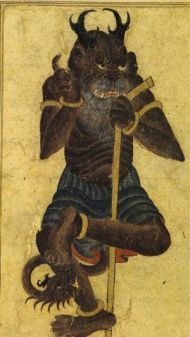 A shaytan (شَيْطٰان; pl. shayatin), or devil/demon, is an evil spirit that incites human beings to do evil actions and think evil thoughts by means of "whispering" (doing waswas) into their victim's minds. The shayatin are frequently mentioned in the Qur'an, and are generally held to be corrupted individuals among the Jinn who have opted to follow the path of Iblis (Satan; the proper name al-Shaytan, or "The Devil", is used to refer to Iblis in particular). Iblis himself is considered by many to himself be a Jinn. The Qur'an also alludes, however, to the "shayatin of humankind"; this is interpreted as a metaphorical usage of the word which describes human beings who behave like the shayatin.[1][2]

The word shaytan, in its various forms, appears 88 times in the Quran.[2]

Thus have We appointed unto every prophet an adversary - devils of humankind and jinn who inspire in one another plausible discourse through guile. If thy Lord willed, they would not do so; so leave them alone with their devising;

Quran 6:112
Is this better as a welcome, or the tree of Zaqqum? Lo! We have appointed it a torment for wrong-doers. Lo! it is a tree that springeth in the heart of hell. Its crop is as it were the heads of devils And lo! they verily must eat thereof, and fill (their) bellies therewith. And afterward, lo! thereupon they have a drink of boiling water And afterward, lo! their return is surely unto hell.

Quran 37:62-68
And We did try Solomon: We placed on his throne a body (without life); but he did turn (to Us in true devotion): He said, "O my Lord! Forgive me, and grant me a kingdom which, (it may be), suits not another after me: for Thou art the Grantor of Bounties (without measure). Then We subjected the wind to his power, to flow gently to his order, Whithersoever he willed,- As also the evil ones [al-shayatin], (including) every kind of builder and diver,-