From WikiIslam, the online resource on Islam
(Redirected from Prayers)
Jump to navigation Jump to search 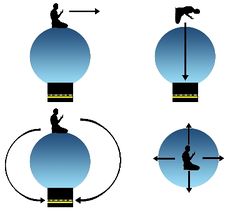 Top-left: Due to the sphericity of the earth, a prayer in any direction will point towards the sky/outer-space, not Mecca.
Top-right: People who are located on the opposite 'side' of the earth would have to pray vertically down towards the center of the earth, and would also blaspheme against Allah, because they defecate toward the direction of the Ka'aba when they answer the call of nature.
Bottom-left: If we use the traditional Muslim method of determining qiblah (i.e. a great circle) this would still be blasphemous because you would be simultaneously praying with your face and backside aimed towards the Ka'aba.
Bottom-right: There is one point on the opposite 'side' of the earth where any direction for all 360 degrees would be facing 'towards' Mecca and consequently, there would be no one direction that would be the correct one.

Salāh or salāt (صلاة) is one of the Five Pillars of Islam. It is the practice of formal prayer in Islam, and is compulsory (fard) for all Muslims. It is a ritual prayer, having prescribed conditions, procedures, and times. Muslims must wash before prayer; this washing is called wudu ("purification").

Most of the Five Pillars are absent from the Qur'an. Thus it only mentions three daily prayers; salat al-Fajr (dawn prayer),[1] salat al-Isha'a (night prayer)[1] and salat al-Wusta (the middle prayer, now al Zuhr).[2] It is the hadith that put the number of daily prayers at five.

The prescribed time periods (waqt) for daily prayers are as follows:

According to the Qur'an[3] Muslims must pray towards the Ka'aba (qiblah being the direction that one has to face in order to do this). If the earth was flat, this results in the problems such asone of the problems, a problem which can be obviated inside of the text if it is understood to believe in a flat earth.

Praying from a Sphere

Due to the sphericity of the earth, a prayer in any direction will point towards the sky/outer-space if a straight line is followed, not Mecca. As such the modern calculations of qiblah usually use the shortest distance to Mecca as the bird flies to be the "direction" of the qiblah from any given geographical point on the earth.

Praying from the Antipode

There would also be one location on Earth where a Muslim could be standing at the opposite side of Earth in relation to the Ka'aba (for example if the Ka'aba was at the North Pole and the Muslim was standing on the South Pole). This is known as the antipode, and for many centuries the apparent logical absurdity of the existence of antipodes to people who did not understand the theory of gravity was used to argue for a flat earth. For this location, any direction for all 360 degrees would be facing 'towards' Mecca and consequently, there would be no one direction that would be the correct one.As with every point on earth, an antipode for the Ka'abah does exist.

According to the Islamic prophet Muhammad, a child should be commanded to pray at the age of seven, and be beaten for prayer when they reach the age of ten.[4][5]

This has often resulted in the abuse of children by Muslim parents, guardians and teachers for not praying/reciting the Qur'an. For example, in Muslim-majority countries like Bangladesh[6] and Saudi Arabia,[7] and even in non-Muslim countries like the United Kingdom,[8][9] Italy[10] and Canada where a 13-year-old girl was killed by her father for not praying.[11][12][13]

Muhammad once commanded a call-maker to lead the prayer, then "take a fire flame to burn all those who had not left their houses so far for the prayer along with their houses."[14] An old man who refused to prostrate in prayer was also "killed as a non-believer."[15][16]

It was reported by Aisha in several sahih hadith that Muhammad said, "Prayer is annulled by a dog, a donkey and a woman (if they pass in front of the praying people)." She also protested about how this rule equated women to animals.[17][18]

The Friday prayer (Jumu'ah) is a congregational prayer performed in mosques that replaces the zuhr prayer performed on the other six days of the week. It is compulsory for men to attend and has been mentioned in the Qur'an.[19] According to Sahih Muslim, prayer is regarded as a dividing line between a believer and a non-believer, and under the Hanbali school of thought, a person who does not perform the required prayers is a disbeliever.

Attendance is dropping in some Arab countries, principally among younger Arabs.[20] Iran has the lowest mosque attendance of any Muslim country, with no more than 1-1½% attending Friday prayers, and claims that a lot of those who do are "dragooned into being there."[21]

In the Netherlands, mosque attendance is actually dropping faster than church attendance. In 1998, 47 percent of Muslims would attend mosque at least once a month. This figure fell by 12 percent in 2008 to only 35 percent. Whilst church attendance for Catholics fell by only 8 percent, and church attendance amongst Protestants showed no change, remaining at 63 percent.[23]

Similarly in the United Kingdom, 48% of Muslims never attend a mosque, with another 6% only attending for special occasions rather than Friday prayers.[24]

According to Ahmed Nassef (co-founder and editor in chief of MuslimWakeUp.com) less than 7 percent of Muslims in the United States attend mosque regularly, compared with 38 percent of Christians who attend church weekly.[25]

Surah al-Fatiha is recited as part of all daily prayers and repeated within each prayer. A Muslim who says all their prayers would recite this surah at least 17 times a day, and over 5,000 times a year. According to hadith, "those who went astray" are the Christians and "those who earned Allah's anger" are the Jews.[26][27][28] Thus, according to the traditional understanding of this verse, the daily prayers of every Muslim include a rejection of Christians and Jews as misguided and objects of Allah’s wrath.