According to Islamic laws set out in the Qur'an and hadith, the keeping and breaking of a fast and the times of prayer, among other things, are related to times of sunrise and sunset. As one gets closer to the North or South Pole, the day or night can extend to up to several months each. At the North Pole itself, daylight and darkness lasts for more than 6 months at a time. Extending the five daily prayers of a period of several months appears to undermine the Islamic ritual, however, and fasting for such a period is evidently impossible.

See the following list. Fasting begins at Dawn and ends at Sunset.

A Muslim was fasting in Iceland, according to some scholars, would have to fast for nearly the entire day. 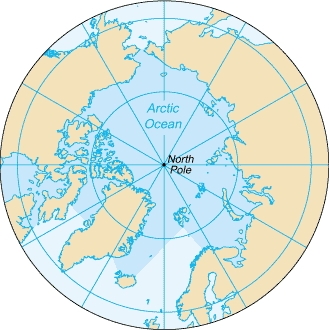 Some have asked, if one is to follow the timings of their home city, what is to be the practice of a permanent Muslim resident or even community in near-polar regions. Additionally, when it comes to regions where the day extends to be weeks or even months, the time-window of fasting for the "closest country" where the fasting window is under a day, the time frame usually still ends up being near 24-hours.

Classical and conciliatory modern perspectives likewise appear unable to comfortably deal with the case of Astronauts, and eventually persons settling on extra-terrestrial bodies (moons, other planets, spacecraft, etc.). There is also the question of facing the Kaaba in Mecca, a city on earth, whilst not on earth. As there have been Muslim astronauts (e.g. Anousheh Ansari[2]) some scholars have created guidelines for these cases (one scholar wrote a handbook called Guidelines for Performing Islamic Rites (Ibadah) at the International Space Station).

Considering Muhammad and his 7th century companions, living in the Arabian desert, likely did not know about the earth having poles and being spherical, the shortcomings of Islamic law in these regards are generally found to be unsurprising.