From WikiIslam, the online resource on Islam
Revision as of 21:56, 1 June 2021 by IbnPinker (talk | contribs)
(diff) ← Older revision | Latest revision (diff) | Newer revision → (diff)
Jump to navigation Jump to search
A checked version of this page, approved on 1 June 2021, was based on this revision. 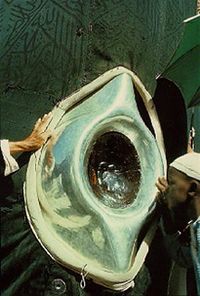 The Black Stone (ٱلْحَجَرُ ٱلْأَسْوَد‎, al-Hajr al-Aswad) is a rock that was embedded into the east-facing corner of the Ka'bah, which is located in Mecca and is the "house of God" towards which Muslims pray five times a day. According to historians, the Black Stone was one of many baetyls employed to idolatrous ends by pre-Islamic Arab pagans, who used the Ka'bah as a pagan shrine in which were housed some 360 idols. The hadith tradition agrees that the stone was already part of the Ka'bah before Muhammad was born during the time of the pagan Arabs. The hadith tradition, however, asserts that the stone descended from heaven along with Adam and Eve and was incorporated into the structure of the Ka'bah when it was supposedly built by the prophet Ibrahim and his son Isma'il.[1] Muhammad was said to have reset the stone into the Ka'bah when the Ka'bah had been destroyed and rebuilt by the Meccans prior to Muhammad's proclamation of prophethood.

During the Hajj pilgrimage, while circumambulating the Ka'bah (tawaf), Muslims are instructed by scripture to kiss, touch, or are least point to the black stone if possible in order to secure blessings. In addition to the wear from this practice by hundreds of million, the Black Stone has been victim to the structural fate of the Ka'bah, which, throughout history, was been demolished, bombarded, and reconstructed several times. At one point, the Black Stone was struck by a stone launched from a catapult and smashed to pieces.[2] On other occasions, the Black Stone is reported to have been defiled with excrement, robbed by the Qarmatians, and otherwise deliberately abused.[3][4][5][6]

Beyond the assertions of the Saudi government, the continued existence of the original Black Stone, its origins, and the historicity of whatever is currently contained in the silver protrusion on the side of the Ka'bah have not been independently verified.[7] Nonetheless, the Natural Museum of History in the United Kingdom has suggested the stone is likely a pseudometeorite, or a terrestrial rock mistaken for a meteorite, that was first sacralized by the pagan Arabs.[8] There is likewise no historical evidence to suggest Ibrahim and Isma'il were responsible for the construction of the Ka'bah or, therefore, the original placement of the Black Stone.

As a baetyl of the pagan Arabs

Most historians consider the Black Stone to be an Arabian baetyl from pre-Islamic times. The Encyclopedia Britannica defines "baetyl" as "In Greek religion, a sacred stone or pillar. The word baetylus is of Semitic origin (-bethel). Numerous holy, or fetish, stones existed in antiquity, generally attached to the cult of some particular god and looked upon as his abiding place or symbol.[9] The Encyclopedia continues:

According to Ibn Ishaq, one of the earliest biographers of Muhammad, the Black Stone was important to the Arabian polytheists prior to Muhammad's prophethood. In a famous tale from the sira, Muhammad was requested by the Quraysh to help mediate on how the Black Stone was to be restored to the Ka'bah as it was being reconstructed.

Other baetyls of the pagan Arabs

The black stone was not the only important stone in Arabia. Historians have pointed out how other Arabian centers were host to their own Ka'bahs, often having their own divine stones of various colors.

The Black Stone of Eloh

Ancient writers Herodian and Cassius Dio mention a temple in Syrian city of Emesa (today known as Hims or Homs). A local Semitic god named Eloh (meaning Lord) was worshipped there. He was known to Romans and Greeks as Heliogabalus, a corrupted garbling of Eloh Gabal (Lord of Mountain, one of Eloh’s titles). Eloh was associated with sun and thus identified with Roman god Sol and Greek Helios.

In the temple one of the holiest relics of antiquity, the Black Stone, was kept. It was believed to come from outside earth (possibly a meteorite) and to be a manifestation of Eloh himself. Faithful from the entire Roman orient made pilgrimage to the stone. They brought valuable gifts and offerings. The followers of Eloh obeyed ritualistic rules. For instance, they were required to be circumcised and were not allowed to eat pork.

This cult was one of many thousands in the ancient Mediterranean and would likely have been forgotten were it not for a certain dramatic and favorable occurrence. In 218 AD, a young priest of that temple and a Roman citizen--Varius Avitus Bassus--was prompted by his power-hungry family to usurp the throne of Rome by claiming to be an illegitimate son of the murdered emperor Caracalla (who ruled 211-217). Successful in his usurpation, Varius Avitus Bassus ruled for four years and was thereafter remembered by his nickname–also the name of his god–Elagabalus.

Elagabalus was generally considered to have been an exceptionally perverted ruler. He was reported to have prostituted himself in the imperial palace and had numerous wives and husbands at the same time. He was widely known as an unapologetic masochist, allowing everyone to beat him. Many of Elagabalus's attributed his debauchery and lack of decorum to what they considered to be the corrupting influence of the cult of the deity Eloh.

The young emperor brought his famous Black Stone to Rome. He wanted to make the worship of Eloh either supreme or the only religion of the Roman Empire. This caused uproar among Romans. Every year in summer a procession foreign and unknown to locals was held. The Black Stone was placed on a chariot with reins attached to it (suggesting that the god himself was coaching). The emperor would walk afoot near the chariot. Senators, notable citizens, parade of soldiers, musicians and exotic animals followed.

After four years of rule which disturbed many Romans, Elogabalus was murdered by soldiers. His body was thrown to river Tiber. [10]