Google, the world’s most popular Internet search engine, has found in a survey that mostly Muslim states seek access to sex-related websites and Pakistan tops the list. Google found that of the top 10 countries - searching for sex-related sites - six were Muslim, with Pakistan on the top. The other Muslim countries are Egypt at number 2, Iran at 4, Morocco at 5, Saudi Arabia at 7 and Turkey at 8. Non-Muslim states are Vietnam at 3, India at 6, Philippines at 9 and Poland at 10.[1]

Here are the Muslim countries and how they placed in the top five world ranking of various bestiality-related internet search terms:

May 2006
About a year go, it appears that Cairo was the #1 city that searched for “sex” on Google. Sabbah provides a few graphs detailing who’s searching for sex on the internet. Here is who searched for sex by region: 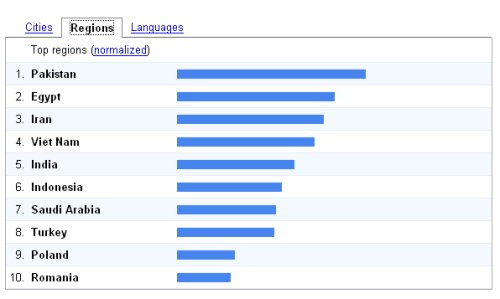 Arabic is the 2nd most common language that is used to search for “gay sex.” It’s the number one language for search involving “sexy.” As you can see in that same graph, Iran is at 3 and Egypt is at 4, listed under regions where search on “sexy” was most conducted.

Turkey is not an Arab country, nor are some of the other countries I listed. But they are Muslim, so I thought the findings were fascinating to say the least. All of this information is not in the least bit shocking, but it’s quite ironic.

What do you guys think?

Pakistan, Morocco, Turkey and Egypt are at the top of the list when it comes to “animal sex.”

For “children sex,” Pakistan is at #1, Egypt #2 and Iran #3. The most common languages used to conduct the search in are Arabic and Turkish.

For “sexy children,” these results are probably the most disturbing. Pakistan, Syria, Iran, Egypt, Saudi Arabia, followed by Turkey at #9.

For “sexy child,” Pakistan is #1, followed by Iran, Saudi Arabia, Egypt, and Turkey. Common languages are Persian, Arabic, and Turkish.

According to Google Trends (December 2011), the term "Sex" is being searched mostly by people in Muslim countries: 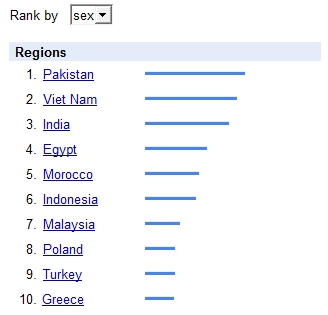 Authorities say Iranian internet users chalked up more visits to pornographic sites than people from any other country on Ashura Day, a Shiite day of mourning.

Mohabat News, the Iranian Christian News Agency, citing a Radio Zamaneh report from the Fars news agency, reports that Ebrahim Bayani, a senior official of the Iranian Revolutionary Guard Corps, told a meeting of IRGC commanders and administrators that the Revolutionary Guards Cyber Army has established that among internet users from 182 countries, Iranians made the highest number of visits to "immoral sites" on Ashura Day.

Bayani added that these "alarming statistics" and the use of satellites mean "we cannot expect the youth of the country to have any motivation to fast or go to mosque."[7]

August 2011
In Iran, search terms revealed a burgeoning appetite for gay pornography, despite protests by President Mahmoud Ahmadinejad that there were "no gays" in the fundamentalist Islamic state ruled over by strict shariah law.

"Hotel businessman (gay)", "Iranian (gay)" and "shower (gay)" in the top 10 hint that Iran has more homosexuals in it than the president thinks.[8]


According to site statistics, last month there were over 2,000 hits from Riad, the capital of Saudi Arabia. The average time a Saudi surfer spends on SexV is 17:23 minutes.

Data also shows that 10 percent of the visitors to the most popular sex site in Israel, Domina, are Arabic speakers.[9]

The Muslim country, which has banned content on at least 17 websites to block offensive and blasphemous material, is the world's leader in online searches for pornographic material
. . .

Pakistan is ranked No. 1 every year (records starting from 2004) for searching the term ‘sex’.

With over 20 million internet users and growing fast, Pakistan has managed to secure the number one slot for searching the term ‘sex’ globally for all years.
. . .


Narrowing the analytics for the search term to just 2011, Pakistan maintained the number one position, followed by India and Vietnam.

Islamabad featured in the top 10 cities worldwide to search the word ‘sex’ in September and December 2011.

December 2011
A ban on pornographic websites in Pakistan by the Pakistan Telecommunication Authority (PTA) in November 2011 has led to a surge in the sale of CDs and DVDs of this particular type of entertainment in Karachi.
. . .


Dealers at the [Rainbow] centre say they have been seeing sales grow since November.

The irony is that the Rainbow Centre dealers download content from the internet as well, said another shopkeeper. “It doesn’t matter if a few websites are blocked. We can still access many more.” Torrents, which are used to download movies, software and other electronic data from millions of personal computers around the world, are used for pornographic content, the dealers said.

But not everyone has the time, internet speed or patience to download entire films.
. . .
Memon also claimed that a great deal of pornographic content is downloaded at bank branches, which shut their doors for people at 5 pm.

While Rainbow Centre is enjoying a reversal of fortunes, ISPs are facing unhappy customers. The chief marketing officer at Qubee, Hashim Sheikh, said some large ISPs took time to implement the PTA decision, which could have potentially resulted in customers switching services.

“In recent weeks, many of our normally happy customers have walked into our sales centres and said they do not want the service anymore. Now you can guess what the reason could be.”
. . .
Kashif Azeem, the administrator of the apnabroadband portal, which is frequented by people seeking information on different ISPs, says a post related to ban on pornographic websites has received the most hits.

Hamas has ordered a full ban on internet pornography in the Gaza Strip -- the latest restriction on personal freedom imposed by the hardline Islamic political party.
. . .


Hamas, which was elected to lead Gaza in 2007, claims the move is necessary to protect 'the fabric of Palestinian society' as more and more Palestinians are seeking adult content online.
. . .
The pro-Hamas newspaper Felesteen wrote that the move was long overdue.

'We have learned that pornographic websites… have been receiving many views in Palestinian society over the past two years, surpassing social and news websites, including official ones like the WAFA news agency,' columnist Issam Shawar wrote.

'This is a dangerous indicator which must push us to create an active plan to protect our Palestinian society.'[14]

Up to 70% of files exchanged between Saudi teenagers' mobile phones contain pornography, according to a study in the ultra-conservative Muslim kingdom.

The study quoted in Arab News focussed on the phones of teenagers detained by religious police for harassing girls.

The same researcher also found that 88% of girls say they have been victims of harassment using Bluetooth technology.
. . .


"The flash memory of mobile phones taken from teenagers showed 69.7% of 1,470 files saved in them were pornographic and 8.6% were related to violence," said report author Professor Abdullah al-Rasheed.[15]

A Tunisian court has ordered the Tunisian Internet Agency (ATI) to block all pornographic websites, which became accessible after the lifting of censorship in January.
. . .
According to the Tunisian Internet site Business news, seven pornographic sites have appeared among the 100 most visited sites in the north African country since the end of censorship. Five of them are among the 50 most consulted.[16]

May 2011
[According to Alexa, a division of Amazon.com that tracks online traffic patterns globally] there are seven pornographic sites in Tunisia that appear among the top 100 most visited sites, coming in at numbers 14, 16 and 20 and 49 60 and 93 and 97.[5]

According to a presentation on the “conscious use of the Internet and secure Internet service,” made by the Telecommunications Department (TIB) of the Turkish Parliament... 2 million online users watch pornographic films each minute in Turkey.[17]