From WikiIslam, the online resource on Islam
Revision as of 18:30, 19 May 2013 by Sahab (talk | contribs)
(diff) ← Older revision | Latest revision (diff) | Newer revision → (diff)
Jump to navigation Jump to search
A checked version of this page, approved on 19 May 2013, was based on this revision.

Sahih (صَحِيْح) is an Arabic word that means genuine/authentic/sound. It is used in classification of ahadith and is the highest level of authenticity given to a narration that passes all of Imam Bukhari's criteria for classification as a sahih hadith. The ahadith (sayings/narrations/reports) are contemporaneous accounts about Muhammad, his life, and the life of his companions. Whereas the Qur'an was written down in book form and later codified by Caliph Uthman, the ahadith did not benefit from such a process, but instead were passed down orally from person to person, until a collector of ahadith came to record them (often many hundreds of years later).

Muhammad al-Bukhari (Muhammad Ibn Ismail Ibn Ibrahim Ibn al-Mughirah Ibn Bardizbah al-Bukhari) was an Islamic scholar and collector of ahadith. When he set out to collect narrations he decided on a set of criterion that he would use to determine the authenticity of what he was collecting. Any narrations that he collected that did not pass these requirements would not be accepted into his collection. Because he used these criteria, his collection is known today as 'Sahih al Bukhari.' Some years later, his student Muslim ibn al-Hajjaj (Abul Husayn Muslim ibn al-Hajjaj Qushayri al-Nishapuri) would use the same criteria to guide his collection. Muslim's collection is known as 'Sahih Muslim.' These are the only two ahadith collections that are prefixed as whole by 'Sahih.' These two Sunni ahadith collections are accepted by Sunni Muslims to be Sahih as a whole, although this does not mean that every single narration included in both collections is Sahih, nor does this preclude narrations in other collections from being sahih also.

The contents of the narration must not be in contradiction with the Qur'an. For example, there are narrations that state that Muhammad performed miracles; but the Qur'an makes clear that he did not - so even though some of these 'miracle' ahadith can be found in the Sahih collections, we know that they fail this criteria, so they can be discarded as 'sahih.' The exception to this rule are of course, the narrations regarded by scholars to be Qudsi. These narrations may contradict the Qur'an, but this does not mean they are not Sahih. 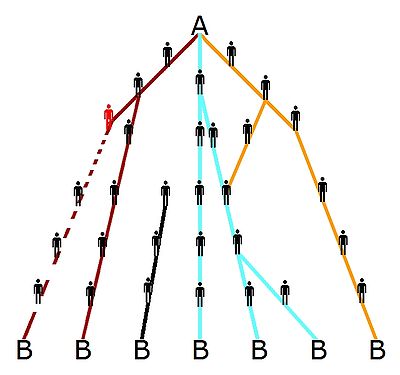 A lot of Muslims will declare any narration that they do not like as 'unauthentic.' However, since we are playing by their own rules (their classifications for ahadith), the onus is on them to show how the narrations are unauthentic. If they are dealing with Sahih Muslim or Sahih Bukhari, then they must address Bukhari's criteria and bring the evidence to show which criteria/s the narration fails on. If they cannot, then it is their duty as a ahadith accepting Muslim to accept the narration until they can show which criteria it fails.

For example, in the modern age, many Muslims find it abhorrent that Muhammad had sex with a child, so the sahih ahadith where Aisha tells you her age are often contested by Muslims and declared 'unauthentic', but let us have look at how many there are; we can count them. Bearing in mind that for each narration in each collection, it was actually passed down through different isnads. There are a lot more 'chains' than the example picture shown above. The details of the narrations are consistent across collections (ie. Tabari, Ishaq, Muslim, Bukhari, Dawud etc..) so that rules out the possibility that the collector made them up or a specific area had incorporated a cultural practice into Islam, and even one sahih narration is enough to form a part of shari'ah.

In short, with these narrations, given the plenitude of them, also the fact that they are 'Sahih' and 'Mutawatir', when dealing with ahadith, this is the closest you can get to: "yes this definitely happened." Therefore the onus is on the Muslim to use his own criteria to disqualify the narration and not on the opponent to prove it is authentic, because they are in Sahih collections.

This page is featured in the core article, Islam and Scripture which serves as a starting point for anyone wishing to learn more about this topic