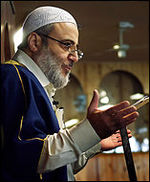 'Moderate' Palestinian-born Danish Muslim leader, Ahmad Abu Laban, was expelled from Egypt and Kuwait for his involvement in the Muslim Brotherhood,[1]

The Jyllands-Posten Muhammad Cartoons, which resulted in more than 200 deaths and hundreds of injuries since their initial publication in September 2005,[2] is one of the most well-known examples of Islamic intolerance. However, this article discusses the lesser-known Muhammad Cartoon Hoax and its role in making the cartoons a world-wide issue.

Initially following the publication of the twelve Jyllands-Posten images, the reaction was comparably negligible. Palestinian-born Danish Muslim leader, Ahmad Abu Laban (who was expelled from Egypt and Kuwait for his involvement in the Muslim Brotherhood,[1] and has links with Egyptian terrorist group Gama'a Islamiya),[3][4][5] took it upon himself to spearhead a campaign demanding an apology from Jyllands-Posten.

Abu Laban created the Committee for the Defense of the Honor of the Prophet, which primarily consisted of extremist Imams[1] and issued a press release which appeared to be a threat towards Jyllands-Posten, "We are not threatening anybody, but when you see what happened in Holland and then still print the cartoons, that's quite stupid."[6] Abu Laban's statements, however, did not stifle the press.

In December 2006, a delegation of Danish Muslim leaders, headed by Ahmad Abu Laban and Ahmed Akkari (a Lebanese-born theological student), travelled to the Middle East to publicise and garner opposition to the offending cartoons. Ahmad Abu Laban, who was also the head of The Islamic Society of Denmark, called upon the Muslim world to "internationalize this issue so that the Danish government would realize that the cartoons were not only insulting to Muslims in Denmark but also to Muslims worldwide."[7] However, the number of images taken to the Middle East had risen considerably.

These poorly produced images appear to be more offensive than the original 12.

The first image is allegedly a depiction of the Islamic prophet Muhammad as a pig. This is highly offensive to Muslims due to pigs, along with urine, faeces and non-Muslims, being considered "najis" (impure).[8][9][10] It was only discovered later that it was not Danish, nor was it a cartoon at all, but a fax copy of a photo, and this photo was in fact not a depiction of the Islamic prophet, but of Jacques Barrot, a pig squealing contestant at the annual French Pig-Squealing Championships in Trie-sur-Baise.[11] The original image can be viewed here.

The second image allegedly depicts Muhammad having sex with a dog. Dogs are also generally considered najis,[8][10] and while, according to the hadith, Muhammad raped his sex slaves and had child brides, there is no hadith that suggests he partook in bestiality.

The extra images were accepted by several major News outlets (including the Australian network SBS and the British BBC, who later admitted their mistake)[16] as being part of the original twelve Jyllands-Posten images.

Many suspect that it was in fact this delegation Muslim leaders themselves who produced these images in an attempt to heighten Muslim aggression towards the original Danish publication. In the past, other like-minded Muslim leaders such as Omar Bakri Mohammed and Noor Ramjanally have done similar things.

Ultimately, these falsified images likely contributed to the rage that ensued and the resulting carnage.