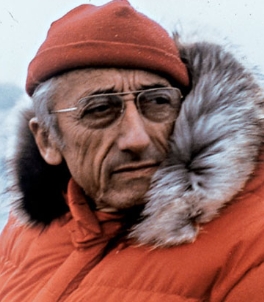 Jacques-Yves Cousteau (June 11 1910 – June 25 1997), was a French naval officer, explorer, ecologist, filmmaker, innovator, scientist, photographer, author and researcher who studied the sea and all forms of life in water. He co-developed the aqua-lung, pioneered marine conservation and was a member of the Académie française. He was also known as "le Commandant Cousteau" or "Captain Cousteau".

It is claimed Jacques Cousteau had converted to Islam after witnessing a "miracle mentioned in the Qur'an that waters of different salinity do not mix because there is an invisible barrier between the two". Here is a typical version of the story:

The famous French oceanographer Mr Jacques Yves Cousteau, who has spent his lifetime on undersea discoveries and is considered an authorithy on undersea exploration has embraced Islam after his amazing undersea discovery was confirmed by the Holy Qur'an the last and final revealed guidence of Allah (God Almighty) for the whole of Mankind and Jinns.

One day somewhere in deep ocean, Mr Jacques Yves Cousteau was doing some undersea exploration when he discovered that within the salty sea water there were several spring of sweet palatable water.

What amazed him most was the fact that the sweet water of the springs was not mingling with the salty water of the sea. For a long time he tried to find plausible excuse for this phenomena, but to no avail.

One day when he mentioned it to a Muslim Professor who told him this phenomena simply followed Allah's command as clearly explained in the Holy Qur'an. He then read to Mr Cousteau the following verses from the Holy Qur'an :

"It is He (Allah) Who has let free the two bodies of flowing water : One palatable and sweet, and the other salty and bitter; yet has He (Allah) made a barrier between them, a portion that is forbidden to be passed" - (Sura 25 Al-Furqan : Verse 53)

"He (Allah) let free the two bodies of flowing water, meeting together : between them is a barrier which they do not transgress." - (Sura 55 Al-Rahman : Verse 19:20)

Hearing this, Mr Cousteau said that surely the Qur'an is a divine Book and embraced Islam. (This was reported in Al-Furqan-Ta-Ha Publishers, London).[1]

The Cousteau Society (originally named the "Cousteau Foundation" until 1992) was founded by Jacques-Yves Cousteau himself and is currently chaired by his second wife Francine Cousteau.[2]

The following letter of clarification (dated 1991) from Didier Cerceau of the Cousteau Society emphatically states that Cousteau did not convert to Islam. Note that this is an official communication made by Cousteau's Foundation and he did not repudiate it.

Sir, We have received your letter and we thank you for your interest in our activities. We state precisely to you that Commander Cousteau has not become a Muslim and that this rumor passes around without foundation.

Forbes magazine reported in May 18, 2004, that, despite the persistence of the rumor in the Muslim world, Cousteau's family have "denied it often".

For decades, as the pioneer of systematic underwater exploration, inventor of the Aqua-Lung and the leading exponent of preserving the sea's ecology, Jacques Cousteau was a global media hero. His documentaries of his trips under the oceans were seen wherever TV existed. In the Muslim world, the rumor still endures that he converted to Islam before he died, although his family has respectfully denied it often. His popularity extended through the Soviet and Chinese communist bloc where it endures through TV reruns. On a recent trip through the Caspian Sea, "crowds of people ran out to wave at the Alcyone wherever it went," says Francine.[3]

The following text has been spread widely on the internet and supposedly quotes Cousteau saying that he "chose" Islam after studying that different oceans did not mix together, something which "the Qur'an talks about".

In 1962 German scientists said that the waters of the Red Sea and the Indian Ocean did not mix with each other in the Strait of Bab-ul-Mandab where the Aden Bay and the Red Sea join. So we began to examine whether the waters of the Atlantic Ocean and the Mediterranean mixed with each other. First we analyzed the water in the Mediterranean to find out its natural salinity and density, and the life it contained. We repeated the same procedure in the Atlantic Ocean. The two masses of water had been meeting each other in the Gibraltar for thousands of years. Accordingly, the two masses of water must have been mixing with each other and they must have been sharing identical, or, at least, similar properties in salinity and density. On the contrary, even at places where the two seas were closest to each other, each mass of water preserved its properties. In other words, at the point where the two seas met, a curtain of water prevented the waters belonging to the two seas from mixing. When I told Professor Maurice Bucaille about this phenomenon, he said that it was no surprise and that it was written clearly in Islam's Holy Book,the Qur'an al-karim. Indeed, this fact was defined in a plain language in the Qur'an al-karim. When I knew this, I believed in the fact that the Qur'an al-karim was the 'Word of Allah'. I chose Islam, the true religion. The spiritual potency inherent in the Islamic religion gave me the strength to endure the pain I had been suffering for the loss of my son.

This quote has been taken from "The Reasons Why They Become Muslims", a series of Turkish books printed by the Islamic publishing house Waqf Ikhlas Publications, and is not attributed to Cousteau by any reliable source.

Jacques-Yves Cousteau died of a heart attack on June 25, 1997 in Paris, aged 87. He did not have an Islamic burial, rather he was buried in a Roman Catholic Christian funeral. He was buried in the family vault at Saint-André-de-Cubzac in France.[4]

An homage was paid to him by the city by the inauguration of a "rue du Commandant Cousteau", a street which runs out to his native house, where a commemorative plaque was affixed.

The Cousteau Society founded by Jacques-Yves Cousteau himself denied the rumor, a denial which came in the form of an official communication that Cousteau felt no need to repudiate even though he had the time and authority to do so.

His family have respectfully denied there is any truth behind the rumor on several occasions, and he was also buried in a Roman Catholic Christian funeral, leaving no evidence whatsoever to suggest he converted or even considered converting to Islam.