From WikiIslam, the online resource on Islam
Revision as of 13:20, 9 May 2011 by Sahab (talk | contribs)
(diff) ← Older revision | Latest revision (diff) | Newer revision → (diff)
Jump to navigation Jump to search
A checked version of this page, approved on 9 May 2011, was based on this revision. 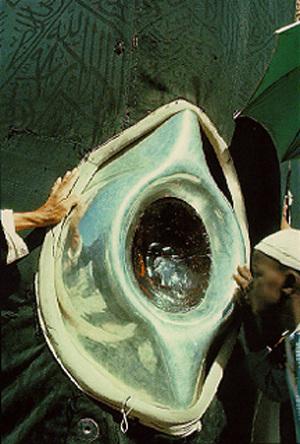 This article discusses the black stone housed at the Ka'aba.

Five times a day Muslims prostrate towards the Ka'aba which houses the famous black stone (Ruknu l-Aswad). The black stone is a baetyl originating from pre-Islamic Arabian polytheism. It is an important part of the hajj which all Muslims must participate in at least once in their lifetime.

The pilgrimage is performed primarily because it is mandatory and because Muslims believe their sins will be forgiven.[1] Circumambulation around the Ka'aba was originally a pagan ritual (albeit they did it naked), as was the running through the valley between Safa and Marwa.[2] The Ka'aba was originally a pagan shrine, housing 360 stones and statues. And pagans performed a hajj before Islam was even concocted.[3]

During its history, the black stone has been struck and smashed by a stone fired from a catapult,[4] it has been smeared with excrement,[5] stolen and ransomed by the Qarmatians,[6] and smashed into several fragments.[7][8]

Do Muslims worship the black stone?

Every Muslim's answer to this question will be an emphatic "No!"

There are various reports from the Prophet (peace and blessings be upon him) concerning the origin or the Black Stone, but most of them are of doubtful origins. In Islam, we should not base our belief on sources which we cannot verify one hundred percent. The only fact that we can certainly establish is that it was put there by Prophet Ibrahim and Isma’eel (peace be upon them both) by the order of Almighty Allah, and the purpose of it was to indicate the beginning of tawaf (circumabulation of the Ka`bah). Thus we as Muslims do not attach divine power to the stone. As `Umar Ibn Al-Khattab (may Allah be pleased with him) is reported to have said: “You’re just a stone that does not benefit or harm anyone, and if I hadn’t seen the Prophet (peace and blessings be upon him) kissing you, I would have not done so.

However, if we look at the facts, perhaps the answer is not so certain.

Muslims from all around the world spend a considerable amount of money and risk a crushing mob[9] to visit the Ka'aba in Saudi Arabia and kiss its eastern cornerstone--the black rock reputed to be a meteorite. If they cannot kiss it, then they point to it as they circumambulate the Ka'aba.

What is a baetyl?

In Greek religion, a sacred stone or pillar. The word baetylus is of Semitic origin (-bethel). Numerous holy, or fetish, stones existed in antiquity, generally attached to the cult of some particular god and looked upon as his abiding place or symbol.

The black stone was important to the Arabian polytheists prior to Muhammad's prophethood.

Other important baetyls in Arabia

The black stone was not the only important stone in Arabia.

What does the Hadith say about the black stone?

b. The ceremonies, prayers, or other religious forms by which this love is expressed.

Please feel free to draw your own conclusions.