William of Orange (Conversion to Islam) 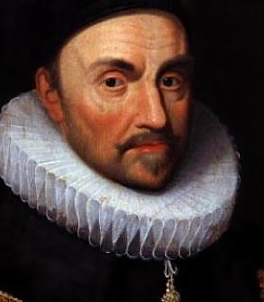 William the 1st (April 24, 1533 - July 10, 1584 AD), Prince of Orange and Duke of Nassau was the main leader of the Dutch revolt against the Spanish and the founder of the royal house of Oranje-Nassau.

A Dutch article claiming William of Orange converted to Islam has been circulating the Internet:

Our Father of the Nation was in the last two years of his life practicing Muslim. Leiden historian who claims at least Tjalling Wenselaar. The candidate spent the last four years of intensive archival research, and says there is no other conclusion is possible. "Yusuf Ibrahim of Orange Nassau, so he really should get into the history books."

The article featured a historian who wrote that deep archival research led him to believe that William of Orange converted to Islam in order to form an alliance with Caliph Abdul Abu Uzrim of the city Al Hoceima in present day Marocco, both partners in the alliance being at war with Spain. It was used on many Islamic websites and forums including marokko.nl and the Dutch Muslims broadcast and for a time it was believed the article was real. This led to heavy debating and the writing of "Allahu Akbar" on Muslim forums.[1]

The article first appeared in the Dutch satirical news website De Speld, on September 25, 2008. Although the site is clearly intended for humor, once the the article itself was posted on other forums and blogs, the proper use of the 16th century Dutch dialect, mentioning the Dutch national archive, quoting a fake 16th century writer side-by-side with the names of real historians led to confusion and the article was taken over by other websites, mainly those that deal with Islam.

The more it spread, the harder it became to trace back to De Speld. Some Muslims eventually stopped quoting the article and just made claims. Though it did not manage to spread outside of the Netherlands, a blog mentioned the incident in English:

A report about a Leiden historian who claims that William of Orange was a practicing Muslim (NL) has spread like wildfire on the (Dutch speaking) internet. "It seems to have struck a sensitive chord," says Jochem van den Berg, who's behind the report. According to the report historian 'Tjalling Wenselaar' claims that William of Orange should appear in the history books as Yusuf Ibrahim of Orange Nassau. William's conversion to Islam, occurring in the spring of 1582, was 'strategic'. "In return for his conversion to Islam and Islamizing the Dutch provinces, the Moorish khalif Abdul Abu Uzrim promised William military aid in in fight against the Spanish," according to Wenselaar... [..] The report first appeared on the De Speld website, which at first glance looks like an internet news site. Jochem van den Berg confirms that it was indeed written by the site.

"We wanted to start off a discussion about Dutch identity. By way of satirical reflection we wrote the article from a Judeo-Christian and Islamic background." "We had no idea that this article would spread like wildfire on the internet," "Turkish and Moroccan sites copied the article and we were also approached by the Muslim broadcaster and other Muslim organizations. they all reacted moderately."