Understanding Muhammad is a book by Ali Sina that discusses the motivations of Prophet Muhammad.

Since September 11, 2001, there have been over 11,000 terrorist attacks, resulting in the deaths of hundreds of thousands of civilians and a lot more injuries, throughout the world. The perpetrators of these attacks were not monsters; they were Muslims. They were pious people who believed and acted in accordance with their faith. There are millions more who think like them and are ready to do the same.

If you think Islamic terrorism is a new phenomenon, think again. Islam owes its success to terrorism. The prophet of Islam boasted, “I have been made victorious with terror". [Bukhari: 4.52. 220] Since the day Muhammad set foot in Medina, he started his campaign of terror. His followers have been doing the same ever since.

Muslims are intolerant, supremacist, bullies, and violent. They are highly inflammable and can explode if they are not treated preferentially and with respect. At the same time, they abuse others and violate the rights of people of other faiths. This is psychopathology.

To understand Muslims, one must understand their prophet. Muslims worship and emulate Muhammad. Islam is Muhammadanism. Only by understanding him can one know what makes them tick.

Understanding Muhammad is a psychobiography of Allah’s Prophet. It seeks to unveil the mystery of that man. Historians tell us Muhammad used to withdraw to a cave, spending days wrapped in his thoughts. He heard bells ringing and had ghostly visions. He thought he was demon possessed, until his wife reassured him he had become a prophet. Convinced of his status, he was intolerant of those who rejected him, assassinated those who criticized him, raided, looted, and massacred entire populations. He reduced thousands to slavery, raped, and allowed his men to rape female captives. All of this, he did with a clear conscience and a sense of entitlement.

He was magnanimous toward those who admired him, but vengeful toward those who did not. He believed he was the most perfect human creation and the universe's raison d'être. Muhammad was no ordinary man. He was a narcissist.

Understanding Muhammad, ventures beyond the stories. Focusing on the "why" rather than the "what," it unravels the mystique of one of the most enigmatic and influential men in history.

Muhammad believed in his own cause. He was so certain of the reality of his hallucinations that he expected everyone to believe too. He would make his Allah indignantly ask “What! Do you then dispute with him [Muhammad] as to what he saw?” (Q.53:12) This is psychopathology. Why should others believe in what he saw? Wasn't it up to him to prove what he saw was real? Only a narcissist expects others to believe in his claims without asking for evidence.

Muhammad was an orphan. Spurned by his mother in his infancy and left in the care of a Bedouin couple, he had a loveless childhood. He then passed to the care of his grandfather and uncle who took pity on him and spoiled him. Not receiving love at a time he needed unconditional love and not receiving discipline when he needed to learn about boundaries, he developed narcissistic personality disorder, a trait that made him a megalomaniac bereft of conscience. He fantasized about unlimited power, expected praise and admiration, believed he was special, and expected others to believe him and go along with his ideas and plans. He took advantage of others, was jealous, yet believed others were jealous of him, and was extremely hurt when rejected, even killing those who deserted him. He lied and deceived, feeling entitled and justified in doing so. All these are traits of narcissistic personality disorder.

Thanks to another mental illness, temporal lobe epilepsy, the prophet of Islam had vivid hallucinations he interpreted as mystical and divine intimations. When he claimed he heard voices, saw angels and other ghostly entities, he was not lying. His problem was that he could not distinguish reality from fantasy. He also suffered from obsessive compulsive disorder, causing his fixations on numbers, rituals and stringent rules. This explains why he lived such an austere life and why his religion is filled with so many absurd rules. 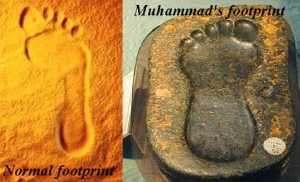 Muhammad had fleshy and swelled hands and feet. His footprint shows he had acromegaly.

In the later years of his life Muhammad was affected by acromegaly, a disease caused by excessive production of a growth hormone, resulting in large bones, cold and fleshy hands and feet and coarse facial features such as enlarged lips, nose and tongue. Acromegaly occurs after the age of 40 and usually kills the patient in his early 60s. It causes impotence, while it increases libido. This explains Muhammad's sexual vagaries in his old age and why in the later years of his life he had such an insatiable craving for sex. He would visit all his 9 wives in one night to touch and fondle them, without being satisfied. His impotence explains his insecurity, paranoia, and intense jealousy of his young wives. He ordered them to cover themselves, lest other men would cast a lusting eye on them. Today, half a billion Muslim women veil themselves, because Muhammad was impotent. Muhammad's illnesses explain a lot of mysteries of Islam.

The combination of all these psychological disorders and his unusual physiognomy made Muhammad a phenomenon that set him apart from ordinary people. His uneducated followers interpreted his differences as signs of his prophethood. Like devotees of all cults, they rose to champion his cause with dedication. By defying death and butchering others they made Islam the world's second largest religion, now the biggest threat to world peace and the survival of human civilization.

Why is it important to know Muhammad? Because over a billion people try to be like him and do as he did. Consequently, the insanity of one man is bequeathed to all his followers. It is by understanding him that we can see through them, and be able to predict these unpredictable people.

We live in a dangerous time. When a fifth of humanity worships a psychopath, eulogizes suicide bombing and thinks killing and martyrdom are ultimate acts of piety, the world becomes a dangerous place. When these people acquire the atomic bomb, the earth becomes a powder keg. Islam is a cult. It is time for mankind to wake up and realize that this cult is a threat to mankind and there can be no co-existence with Muslims. As long as Muslims believe in Muhammad, they are a threat to others and to themselves. Muslims must either leave Islam, leave their culture of hate and join the rest of mankind as fellow humans, or non-Muslims must separate themselves from them, ban Islam, end the immigration of Muslims and send home those who plot against democracy and refuse to integrate.

Islam is incompatible with democracy. It is a warring creed that uses democracy to destroy it and to establish itself as a world wide dictatorship. The only way to avert the clash between this barbarity and civilization, a world disaster, is to expose the fallacy of Islam and demystify it. Muslims must be weaned from Islam for humanity to live in peace.

Understanding Muhammad is imperative for both Muslims and non-Muslims. This book makes that task easy.[1]