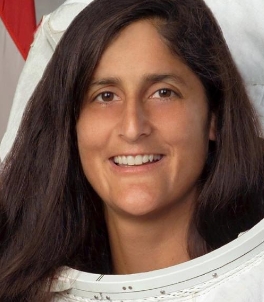 Sunita Williams (born September 19, 1965) is a United States Naval officer and a NASA astronaut. She was assigned to the International Space Station as a member of Expedition 14 and then joined Expedition 15. She holds the record of the longest spaceflight (195 days) for female space travelers.

Her father, Dr. Deepak Pandya, is a Hindu and her mother, Bonnie Pandya, is a Christian. Williams has an affinity for both faiths[1] and is known to be a Ganesh devotee.[2]

It has been claimed on various websites, blogs, forums, and in chain e-mails/mass SMS texts, that Sunita Williams had converted from Hinduism to Islam on her return from the moon.

Here are a few examples of the claims being made:

Sunita Williams (First Indian woman who went on a space journey few months back) accepted “ISLAM” Masha Allah, bcoz when they were on the moon, they saw towards EARTH, the entire EARTH looked dark, but 2 places on the EARTH GLITERED & looked like SPARKS (Roshni). They were shocked to see that and saw them with the help of telescope and came to know that those two places were “MAKKAH” and “MADINAH” Masha Allah!. Then they decided that after reaching to earth they’ll accept “ISLAM”. So be proud u’r a muslim. Allah Hafiz…![3]

Sunita Williams, the 1st indian lady who went to the moon on 02/07/2007 said that from the moon, the whole earth looked very black and dark, except the two places which were bright and shining when she saw through the telescope. These places were MAKKAH & MADINA (Saudi Arabia). Also, at the moon all the frequencies failed but still she could listen to the AZAAN..s'allah[4]

Encouragin news for Muslims....Sunita Williams the woman who went in space has converted to Islam because when they were in space the entire Earth appeared dark but only two places on Earth appeared like sparks. With telescopic view they identified the two places as MAKKAH and MADINAH and resolved to accept Islam upon reaching the Earth. Alhamdulillah the almighty brought them back safely, so subhanallah, be proud to be a Muslim.[5]

Contrary to the claims, Williams went to the International Space Station, not to the moon. The last moon landing (Apollo 17) was on December 7, 1972,[6] and Eugene Cernan is, to date, the last person to have walked on the Moon.[7]

She is also not the "first Indian woman who went on a space journey". The Indian-American astronaut, Kalpana Chawla, was the first woman of Indian ethnicity to fly in space.[8]

The claims state that they decided, upon returning to earth, they would accept Islam. However, when setting off toward the International Space Station, Williams had taken with her a copy of the Bhagavad Gita and a small statue of Lord Ganesha,[9] and following her return to earth on June 22, 2007, she showed no signs of having converted to Islam. In fact, she claimed Ganesha, not Allah, was looking after her.

Having created a new record of stay in space by a woman, Indian-American astronaut Sunita Williams now has set her eyes on the Red Planet.

Williams, who returned to earth on June 22 after spending 195 days at the International Space Station, said she would love to fly to Mars, if not the moon.
. . .
She also thanked people across India, particularly from her native state of Gujarat, who prayed for her safe return to earth.

Williams fondly recalled taking a copy of Bhagvad Gita and an idol of Lord Ganesha along with her to the space station and took tense moments in her stride. "I knew Ganesha was looking after me," she said.

She said she will be visiting Hyderabad in September for the International Astronautical Congress after which she will visit her relatives in Gujarat and Delhi.[10]

More than three months later in an October 2007 interview with India Today, nothing had changed, and she reiterated her desire to go to the moon.

Up in space, the Gita and Ganesha were what kept me grounded. They put life in perspective," says Sunita Williams in her India Today interview. In a country that believes that beauty trophies are a genetic right, they are calling her the true Miss Universe.
. . .


Williams took with her into space a statue of Lord Ganesha and a copy of the Bhagavad Gita for company. She had never read the Gita with any depth before her space journey though her father had narrated to her the epics--the Ramayan and the Mahabharat--when she was young. She says: "This may sound a bit corny, but it sort of grounds you. In a little spacecraft zipping around the earth, you are doing a lot of things, sometimes it feels like work...maybe you are taking for granted where you are, what you are doing...things like Ganesha, the Gita bring you back home. It is nice to read about Arjuna's trials and tribulations and it puts your life in perspective."
. . .


At 42, Williams is still raring to go back into space apart from sharing her experiences with those planning to go up. She says: “If I have the opportunity, I would like to go to the moon.[11]

The Times of India has reported that in 2012, Sunita will carry English translations of the Upanishads on her journey to Space:

When Sunita Williams is thousands of miles above the earth taking a bird's eye view of the universe from her space shuttle window, she will try to understand universal truths of the Upanishads. The Indian American astronaut — who will spend six months in space from July 14 — is carrying with her an English translation of one of the most important Hindu scriptures.
. . .
The astronaut is all set to go into quarantine ahead of her second space odyssey after which it will become increasingly difficult for the family to stay in touch with her. Williams last worked aboard the International Space Station for six months in 2006. She will take off from the Baikonur Cosmodrome in Kazakhstan with two other astronauts, a Russian and a Japanese[12]

The various claims also state that Williams witnessed a miracle whilst on the moon, where the entire earth looked dark, except for Mecca and Medina, which were lit up like "sparks".

The images that accompany many of these claims is a top-down picture of the most holiest sites of Islam, the Masjid al-Haram in Mecca and the Masjid al-Nabawi in Medina,[3][13] both buildings looking like bright lights surrounded by darkness.

These specific images have been circulating among Muslims over the internet from as early as May 2006.[14] Williams launched with her crew on December 9, 2006, and docked with the International Space Station on December 11, 2006,[15] more than six months after the miracle images surfaced.

The actual source for the original, undoctored, images is spaceimaging.com, and are dated December 1999.[16] Although the Masjid al-Haram and the Masjid al-Nabawi appear quite striking in these images, there is nothing supernatural about their reflective white marble construction, and they are not surrounded by darkness.

Watermark-free versions of these images are offered for sale by spaceimaging.com as large 4MB downloads, but whoever was behind this hoax did not purchase them. A close look at the doctored images reveals that the watermarkings are still visible.

An analysis of all the available facts has shown that Sunita Williams is not the first woman of Indian ethnicity to fly in space, and that she did not go to the moon. She also believes Lord Ganesha was looking after her in space, and even her visit to India upon her return to earth coincided with the Ganesh celebrations.[2]

Furthermore, the images which are used as proof that she converted after witnessing and capturing a miracle, have been available on the net in their doctored form since May 2006, and in their original form since December 1999.

Thus, there is no evidence whatsoever to back up the claim that Sunita Williams, or any of the other unspecified individuals, ever witnessed a miracle in space/on the moon, nor did they ever agree to convert to Islam upon their return to earth.