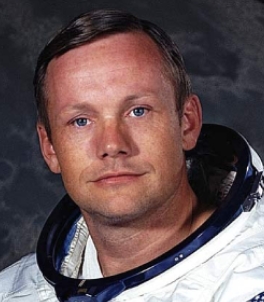 Neil Alden Armstrong (August 5, 1930 – August 25, 2012) was an American aviator and a former astronaut, test pilot, aerospace engineer, university professor, and United States Naval Aviator. He was the first person ever to set foot on the Moon.

Neil Armstrong is said to have converted to Islam upon hearing the Adhan (call to prayer) on the moon. A typical version of the story follows:

When Neil Armstrong and co. walked on the moon, they heard sounds in a strange language they did not understand. ‘When Neil Armstrong went to Egypt, he heard the adhan, and said, “it was spacey something similar I heard while I was on the moon". Egyptian Friend told him that, it was the sound of Azaan (call for Muslim prayer). And Neil Armstrong immediately became Muslim because of this experience.

Transcript and Audio of Moon Landing

The claim states that the Apollo 11 crew members heard "sounds in a strange language they did not understand", and that it was only later in Egypt that Armstrong learned it was the Muslim call to prayer. However, on NASA's official website, nasa.gov, they provide the audio and the transcript of the initial 1969 moon landing, and there is no mention of any of the crew members hearing these unfamiliar sounds.[1]

Additionally, before Armstrong and fellow astronaut Edwin Eugene "Buzz" Aldrin, Jr. stepped out of the lunar module, the Apollo 11 crew members observed a moment of silence whilst Aldrin read from the New Testament and administered Communion to himself. The Christian ceremony is described in an article by Aldrin in a 1970 copy of Guideposts magazine:

I poured the wine into the chalice our church had given me. In the one-sixth gravity of the moon the wine curled slowly and gracefully up the side of the cup. It was interesting to think that the very first liquid ever poured on the moon, and the first food eaten there, were communion elements.[2]

Mr. Armstrong has asked me to reply to your letter and to thank you for the courtesy of your inquiry.

The reports of his conversion to Islam and of hearing the voice of Adzan on the moon and elsewhere are all untrue.Several publications in Malaysia, Indonesia and other countries have published these reports without verifi- cation. We apologize for any inconvenience that this incompetent journalism may have caused you.

Subsequently, Mr. Armstrong agreed to participate in a telephone interview, reiterating his reaction to these stories. I am enclosing copies of the United States State Department's communications prior to and after that interview.

A letter from the US State Department rejecting the claim was also attached to the letter from Armstrong's administrative aide.

1. FORMER ASTRONAUT NEIL ARMSTRONG, NOW IN PRIVATE BUSINESS, HAS BEEN THE SUBJECT OF PRESS REPORTS IN EGYPT, MALAYSIA AND INDONESIA (AND PERHAPS ELSEWHERE) ALLEGING HIS CONVERSION TO ISLAM DURING HIS LANDING ON THE MOON IN 1969. AS A RESULT OF SUCH REPORTS, ARMSTRONG HAS RECEIVED COMMUNICATIONS FROM INDIVIDUALS AND RELIGIOUS ORGANIZATIONS, AND A FEELER FROM AT LEAST ONE GOVERNMENT, ABOUT HIS POSSIBLE PARTICIPATION IN ISLAMIC ACTIVITIES.

2. WHILE STRESSING HIS STRONG DESIRE NOT TO OFFEND ANYONE OR SHOW DISRESPECT FOR ANY RELIGION, ARMSTRONG HAS ADVISED DEPARTMENT THAT REPORTS OF HIS CONVERSION TO ISLAM ARE INACCURATE.

3. IF POST RECEIVE QUERIES ON THIS MATTER, ARMSTRONG REQUESTS THAT THEY POLITELY BUT FIRMLY INFORM QUERYING PARTY THAT HE HAS NOT CONVERTED TO ISLAM AND HAS NO CURRENT PLANS OR DESIRE TO TRAVEL OVERSEAS TO PARTICIPATE IN ISLAMIC RELIGIOUS ACTIVITIES.[3]

Letter in the Journal Arabia

In June 1985, the following letter to the editor was printed in the journal Arabia: The Islamic World Review.

A MUSLIM OVER THE MOON?

Arabia is by far the superior newsmagazine regarding what is going on in the Muslim world today. Your reporting is extremely thorough and seeks to be as objective as possible. Your willingness to criticise political policies as well as religious happenings in the Muslim world is refreshing. As an American I would feel your slant on the West is basically fair. It would be most helpful if you would dispel a misconception prevalent in almost all Muslim countries. From Morocco to the Philippines it is commonly believed that Neil Armstrong heard the Azan on the moon, converted to Islam and is now engaged in the full-time propagation of the Muslim faith.

The US State Department has issued a memo saying that the story about Armstrong's conversion was untrue. The memo said "While stressing his strong desire not to offend anyone or show disrespect for any religion, Armstrong has advised department that reports of his conversion to Islam are inaccurate." The memo further says, "if post receives queries on this matter, Armstrong requests that they politely but firmly inform querying party that he has not converted to Islam and has no current plans or desires to travel overseas to participate in Islamic religious activities."

N.B. The memo was sent to all our diplomatic and consular posts.

In Armstrong’s official 2005 biography, First Man: The Life of Neil A. Armstrong, he states in his own words that the conversion rumors are false.

I have found that many organizations claim me as a member, for which I am not a member, and a lot of different families — Armstrong families and others — make connections, many of which don’t exist. So many people identify with the success of Apollo. The claim about my becoming a Muslim is just an extreme version of people inevitably telling me they know somebody whom I might know.[5]

During the Q&A session at the Global Leadership Forum held in Kuala Lumpur, Malaysia, he again denied converting to Islam or hearing the Muslim call to prayer on the moon.

“The only thing that might be more difficult than the Apollo programme was trying to fake it,” he said during a question-and-answer session at the Global Leadership Forum here yesterday.

Asked by Malaysian astronaut candidate Zaid Zahari, 32, which he considered to be his greatest achievement – landing on the moon or getting back to Earth safely – Armstrong said it was a “superior moment” when he set foot on the moon.
. . .


Armstrong, 75, also denied he had heard the Muslim call to prayer on the moon and had converted to Islam.[6]

Fatwa Ruling the Conversion as Fabricated

The story about Neil Armstrong, who they say was the first man to step onto the surface of the moon, becoming a Muslim is one of the stories that are passed around among people. We have researched this story and we did not find any reliable source for it.

We have got used to hearing stories like that which then turn out to false, and it seems that this is a deliberate attempt to shake the faith of the ordinary Muslims, especially since they fabricated this story with some exciting details, that seem to affirm the superiority of this religion over all other religions. So they spread the news that famous people, such as artists, sportsmen and others have become Muslim, and they quote something with the story that affirms the truth of the Messenger and his message, then after a while they hasten to disprove these stories. Perhaps the story about Armstrong becoming a Muslim is of this type, because he is one of the most famous people in the world. Moreover the reason why he supposedly became Muslim – as they say – is that he heard the adhaan (call to prayer) on the Moon then he heard it again in Egypt.

If the story of such a famous person becoming Muslim was really true, you would see him calling people to Islam and you would see the scholars and daa’iyahs and the Islamic media meeting him and talking to him, none of which happened in this case. If you compare the story of Armstrong supposedly becoming Muslim with the story of Yusuf Islam (the former Cat Stevens, the famous British singer), you will see the difference between lies and truth, imagination and reality.

Is the story that the astronaut Neil Armstrong became Muslim true?
Islam Q&A, Fatwa No. 20880

There is no evidence whatsoever to support the claim that Neil Armstrong converted to Islam, or that he and the other Apollo 11 crew members witnessed anything miraculous while on the moon. Conversely, there is copious amounts of evidence that directly or indirectly prove the entire claim to be a hoax. The evidence against this claim is so strong that there has even been a fatwa issued confirming it as fabricated.

Armstrong himself, in his autobiography, denied ever converting to Islam. His administrative aide and the US State Department also denied any truth behind the conversion rumors. He would later, in Malaysia, explicitly deny that there was any truth behind the claim that he also heard the Muslim call to prayer on the moon, and the transcript and audio of the moon landing itself contradict the claim that "strange" sounds or words were ever heard.