"Most blessed Father— Your holiness will pardon the liberty taken by one of the lowest of the faithful, though a zealous admirer of virtue, of submitting to the head of the true religion this performance, written in opposition to the founder of a false and barbarous sect. To whom could I with more propriety inscribe a satire on the cruelty and errors of a false prophet, than to the vicar and representative of a God of truth and mercy? Your holiness will therefore give me leave to lay at your feet both the piece and the author of it, and humbly to request your protection of the one, and your benediction upon the other; in hopes of which, with the profoundest reverence, I kiss your sacred feet."

Mahomet (Le fanatisme, ou Mahomet) aka "Fanaticism, or Mahomet" is a five act play by French playwright and philosopher Voltaire that was written in 1736 with its debut performance in Lille on 25 April 1741 and then in Paris on 9 August 1742. 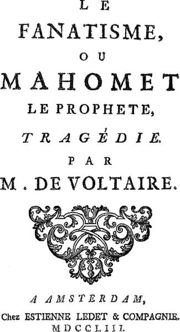