No human on earth can draw a straight line on the surface of the earth between two far cities except with the aid of detailed maps, made possible today due to airplanes, satellites, and knowledge of latitude, longitude, and land height. However, there was a person who had done this 1400 years ago. This person is the prophet Muhammad (peace be upon him).

Wabr ibn Yohanas Al-Khozaee said: the prophet (peace be upon him) said to me ' if you build the mosque of Sana'a, make it to the right of a mountain called Deyn'

To explain, Al-Hafez Al-Rahzey says in his book 'The History of Sana'a) that the prophet (peace be upon him) ordered Wabr ibn Yohanas Al-Khozaee to build the mosque in Bathan park, from where is found a rock in Gamdan and face it to a mountain called Deyn 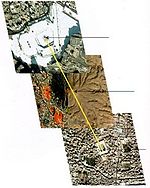 The prophet Muhammad (peace be upon him),1400 years age, ordered to build the mosque Sana'a facing Jabal-e-deen .If we use Google Earth and draw a straight line from the mosque Sana'a to the Qibla which is in Makkah, it will pass through the peak of jabal-e-deen and will end at the center of Kaba.

How could someone 1400 years ago have shown the exact direction for kaba from a far away city without using the new aids needed for such a process?

Of course this a miracle.

As claimed, if you draw a straight line starting at the mosque in Sana'a/Yemen to the Ka'aba in Mecca, it does indeed hit the South-Eastern wall of the Ka'aba almost exactly perpendicular. However, the mosque in Sana'a does not seem to be precisely aligned with the Ka'aba. As indicated by the yellow lines, the whole building has no wall that corresponds in any way, with the direction of the Ka'aba or its walls. Without knowing how the rock located in the mosque are aligned, with regard to Mecca and the Ka'aba, but it is unlikely that they as the builders have done a very poor job indeed as the mosque is poorly 'aligned'.

Aligning the straight line across the peak of the Dyan mountain

The connecting line between the Ka'aba and the Sana'a mosque does cross the top of the Dyan as has been claimed by Muslims. However, it misses the peak of the mountain (as modelled in Google Earth and indicated by the red arrow) by about 100 yards. This might be within the tolerance of Google Earth's precision (elevation exaggeration factor 1, i.e. elevations to scale), but we must note that the claimants themselves are using Google Earth to 'prove' this miracle, and so too are we. Now we will show what happens if we let the line cross the exact center of the peak:

As can be seen, the connecting line between the Sana'a mosque and Mecca would miss the Ka'aba by more than two miles. That is not too much compared to the overall distance of more than 700 miles, but it doesn't show the kind of divine precision referred to by those making the 'miracle' claim. However we must recognize that Google Earth may not be precise - it could be a little closer or a lot further away than we can verify, but again, the claimants are also using Google Earth to demonstrate this 'miracle', and fact checking does not reveal their claims to be accurate.

The red lines indicate the inclusion zones for 'alignment with the Ka'aba'. Anything in the path of these lines can be claimed to 'align' with the Ka'ba

The image to the left, shows red lines that stretch perpendicular from the walls of the Ka'aba in the four main directions. As is clear from that image, the alignment of any mosque in the four orientations is only dependent on the coordinates of the city it is located in, i.e. it is a city located on a red line, any building in the city can be connected to the Ka'aba by a straight line that hits one of it's walls perpendicular (ie. shopping malls, public toilets, houses, etc..) Three of the four orientations (S/E, N/E and N/W) were checked for major towns or cities close to the red connecting lines.

The green line connects the mosque in Kabul to the Ka'aba, showing it is also perpendicular.

the Green line connects the Kabul mosque to the Ka'aba. The yellow alignment lines show that it is better aligned to the Ka'aba than the Sana'a mosque

An example of another mosque that seems to align with the Ka'aba is the one in Kabul. We can see in the image on the right, the blue line connects the mosque in Sana'a/Yemen to the Ka'aba (S/E wall), and the green line connects to a mosque in Kabul (N/E wall). The connecting line from Kabul hits perpendicular too. As you can see from the picture, the Kabul Mosque's (roughly 2,000 miles distant) alignment is much better than that of the mosque in Sana'a ( the yellow lines in relation to the green line).

There are several other mosques that can be connected to the Ka'aba in a way that the lines seem to hit the walls perpendicular if seen alone (compared to lines on the ground). The 'straight line' connection fits better with the following Mosques (compared to the one in Sana'a):

This is only a sample though - more can be found by anyone willing to spend the time looking. There is nothing special about the Sana'a mosque, except for the claim that it was founded by Muhammad. Furthermore, those living in the Desert (Arabs) relied on their sense of direction and we know Muslims are required to face Mecca 5 times per-day every-day when they pray. Why is it such a miracle that Muhammad and his companions knew where Mecca was?

Even the Egyptians and Mesopotamians were more precise in their distance and orientation calculations, and that was 5,000 years ago. They used the stars as a guide. Is that a 'miracle' from Allah too?