From WikiIslam, the online resource on Islam
(Redirected from Fastest Growing Religion)
Jump to navigation Jump to search 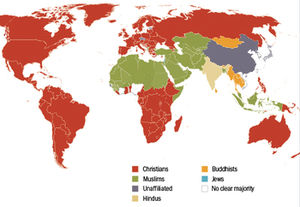 A map of the world, showing the major religions distributed in the world today (Pew, Dec 18, 2012).

Islam is often heralded in popular media as the fastest growing religion in the world. In certain distinct measures, this is correct. In most Muslim-majority countries, birthrates are exceptionally high. This is due to the economic underdevelopment of these regions and exceptionally low rates of female education and empowerment - both well-established factors predicting increased birthrates. In West, where Muslims frequently comprise significant minority populations, birthrates among Muslims are nearer to national averages of the countries in which they reside. Still, in these Western countries, Muslim minorities are often the fastest growing minority populations. This growth rate, however, is overwhelmingly due to immigration rates rather than birthrates.

While the variety of individual religious-change incomparably greatest in both magnitude and rate of increase is that of leaving religion altogether, both in most of the worlds countries and across the globe altogether, Islam does hold the superlative titles of highest birthrates in some regions and highest immigration-rate in others. Indeed, a number of investigations suggest that in countries where a tangible number of people convert to Islam, the majority of these converts ultimately apostatize (seven in ten, according to one estimate)[1] - however, these particular findings are not conclusive.

According to "The Future of the Global Muslim Population," published in January 2011 by the Pew Forum on Religion & Public Life, the growth and anticipated future growth of Islam is primarily due to "their relatively high birth rate, the large number of Muslims of childbearing age, and an increase in life expectancy in Muslim-majority countries" and conversions play little part in the increase due to available data suggesting "Islam loses as many adherents via conversion as it gains."[2][3]

In 2006, countries with a Muslim majority had an average population growth rate of 1.8% per year (when weighted by percentage Muslim and population size).[4] This compares with a world population growth rate of 1.12% per year[5], and according to the World Christian Encyclopaedia, between 1990 and 2000, Islam received around 865,558 converts each year. This compares with an approximate 2,883,011 converts each year for Christianity during the same period.[6] By sharp contrast, the number of individuals who have left religion altogether in the same period is incomparably larger.

Muslims previously outnumbered Christians in sub-Saharan Africa. However, a study published in April 2010 by the Pew Forum on Religion & Public Life has found that Christians now outnumber Muslims by 2 to 1 making Islam a minority belief.[7][8]

The number of adherents to Christianity in sub-Saharan Africa grew from fewer than 9 million in 1910 to 516 million today, a 60-fold increase eclipsing the growth of Islam.[9]

According to the Cultural Orientation Resource Center,[14] 60% of all refugees admitted into the United States are from Muslim-majority countries. Likewise, a Pew report published in January 2011 found that "About two-thirds of the Muslims in the U.S. today (64.5%) are first-generation immigrants (foreign-born)".[15]

Contrary to figures provided by CAIR and despite the influx of Muslim refugees, a Pew survey carried-out in October 2009 found the estimate for the total Muslim population of the U.S to be at only 2.454 million.[16] Percentage-wise, Islam represents only 0.8 percent of the United States' religious make-up.

A United Nations' survey showed that between 1989 and 1998, Europe's Muslim population grew by more than 100 percent, due mainly to the effects of immigration from Muslim countries. Ontario Consultants on Religious Tolerance have listed a figure of 2.9 percent per year, however they do not provide a source. According to a Pew report published in January 2011, the future growth of Islam in Europe will be "driven primarily by continued migration."[15]

In the Netherlands, mosque attendance is dropping faster than church attendance. In 1998, 47 percent of Muslims would attend mosque at least once a month. This figure fell by 12 percent in 2008 to only 35 percent. By contrast, church attendance for Catholics fell by only 8 percent, and church attendance amongst Protestants showed no change, remaining at 63 percent.[29]

It has been estimated that during 2001 - 2011, about 100,000 people converted to Islam in the United Kingdom, but estimates also suggest that 75 percent of these converts also left Islam during this period.[30] At the same time, there were an estimated 200,000 apostates from Islam living in the UK, double the number that converted.[31]

Similarly to the rest of Europe,[15] the growth of Islam in the UK is primarily due to higher birthrates among Muslims (27 percent of Muslim families have three or more dependent children, compared with 14 percent of Sikh, 8 percent of Hindu, and 7 percent of Christian families)[32] and immigration (54 percent of all UK Muslims are foreign born).[33]

A NOP poll of British Muslims commissioned by Channel 4 also found that 48% of Muslims never attend a mosque, with another 6% only attending for special occasions.[34]

There are about 9 million Muslims in Russia and less than 3,000 ethnic Russians converted to Islam in fifteen years. During the same period, almost 2 million ethnic Muslims have became Orthodox Christians. Over 400 Russian Orthodox clergy belong to traditionally Muslim ethnic groups, 20 percent of Tatars are Christian, and 70 percent of interfaith marriages result in the Muslim spouse conversion to Christianity.[35]

Systematic persecution of religious minorities in almost every Muslim-majority country likely inflates the number of Muslim converts in these nations in a manner surveys are unable to detect. Following the 2010 murder of a leading Muslim politician who called for modifications to Pakistan’s blasphemy law, for instance, it was reported that at least 20 Pakistani Christians were converting to Islam each week out of fear.[36] And according to the Society for the Protection of the Rights of the Child (SPARC), there were as many as 2,000 women and girls who were forcibly converted in 2011 to Islam through rape, torture and kidnappings in Pakistan.[37]

Comparable albeit less dramatic analogs have also been found in the Western world. In the United Kingdom, it was reported in 2007 that police were working with universities to clamp down on "aggressive conversions" to Islam, during which vulnerable teenage girls were beaten up by Muslim thugs and forced to abandon university courses.[38][39]