The Bangladeshi news source The New Nation published a very sensational story on April 22, 2004 that is reproduced here: 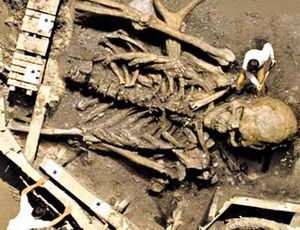 Recently gas exploration is going in the desert of south east region of Saudi Arabia . This desert region is called Empty Quarter , which means in Arabic "RAB - UL -KHAALEE"; this body has been found by ARAMCO exploration team. This proves what Allah SWT said in QURAN about the people of AAD nation and HOOD nation.

They were so tall, wide and very power full that they were able to pull out big trees just with the one hand. But what happen after when they become misguided and disobeys Allah SWT, Allah SWT destroyed the whole nation. ULEMA KIRAM of Saudi Arabia believes that this body belongs to AAD nation.

Saudi military took over this whole area. And nobody is allowed to go in this region except Saudi ARAMCO personnel's. Saudi government has kept it very secret but some military helicopters took pictures from air. And one of them he runs on internet here in Saudi Arabia.[1] 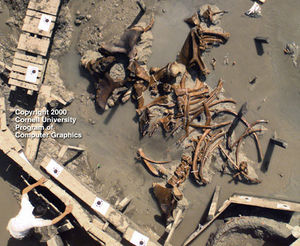 This is the original photo before it was doctored. Source 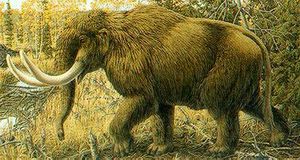 The image that was associated with the news article was doctored. The original image, which is shown to the right, is of course the aerial photo of a pit at a site outside of Hyde Park, New York, which was taken on September 16, 2000. The site was excavated by the Paleontological Research Institution and the Cornell Department of Geological Sciences and what they found was the skeleton of a mastodon.

The American mastodon (scientific name Mammut americanum) roamed North America from at least 3.75 million to 10,000 years ago. Mastodons, along with mammoths and modern elephants, are members of the order Proboscidea. As adults they stood between 2.5 and 3 meters (8-10 feet) at the shoulder and weighed between 3500 and 5400 kilograms (4-6 tons).

So the site does not contain the skeleton of a giant man and it is not in Saudi Arabia. But why then did one of the major publications of Bangladesh reports such a deceiving story?

The answer is to be found in the books of hadith and the stories that were told by the Prophet Muhammad. According to several hadiths Adam was 60 cubits (90 feet) tall.

Narrated Abu Huraira: The Prophet said, "Allah created Adam, making him 60 cubits tall. When He created him, He said to him, "Go and greet that group of angels, and listen to their reply, for it will be your greeting (salutation) and the greeting (salutations of your offspring." So, Adam said (to the angels), As-Salamu Alaikum (i.e. Peace be upon you). The angels said, "As-salamu Alaika wa Rahmatu-l-lahi" (i.e. Peace and Allah's Mercy be upon you). Thus the angels added to Adam's salutation the expression, 'Wa Rahmatu-l-lahi,' Any person who will enter Paradise will resemble Adam (in appearance and figure). People have been decreasing in stature since Adam's creation.

Sahih Bukhari 4:55:543
Narrated Abu Huraira: The Prophet said, "Allah created Adam in his complete shape and form (directly), sixty cubits (about 30 meters) in height. When He created him, He said (to him), "Go and greet that group of angels sitting there, and listen what they will say in reply to you, for that will be your greeting and the greeting of your offspring." Adam (went and) said, 'As-Salamu alaikum (Peace be upon you).' They replied, 'AsSalamu-'Alaika wa Rahmatullah (Peace and Allah's Mercy be on you) So they increased 'Wa Rahmatullah' The Prophet added 'So whoever will enter Paradise, will be of the shape and form of Adam. Since then the creation of Adam's (offspring) (i.e. stature of human beings is being diminished continuously) to the present time."

According to the above traditions humans have been decreasing in size ever since Adam put foot on earth. So that digitally forged photo is an attempt to prove that what Muhammad said was true.

Discoveries in paleontology show that humans have been steadily growing in size. Homo habilis who lived 2.4-1.5 million years ago were no more than 150 cm tall. Their ancestors, the Australopithecus, were just about 100 cm tall. Therefore Muhammad’s story of Adam and other ancient people being extremely tall is contrary to science.

If a major newspaper in this day of the Internet and world wide communication is not abashed to fabricate such an obvious lie to promote Islam one can only imagine how the rest of the miracles and acts attributed to Muhammad were forged in a time when educated people were scarce and opposing views were gagged.