From WikiIslam, the online resource on Islam
Revision as of 20:34, 15 July 2013 by Sahab (talk | contribs)
(diff) ← Older revision | Latest revision (diff) | Newer revision → (diff)
Jump to: navigation, search
A checked version of this page, approved on 15 July 2013, was based on this revision. 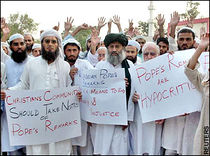 Muslims in Pakistan protest against the Pope's remarks. They do this by threatening the already heavily persecuted Christian minority. (more pictures)

The Pope's speech controversy refers to the events following the Regensburg lecture which was delivered on September 12, 2006 by Pope Benedict XVI at the University of Regensburg in Germany, where he had once served as a professor of theology.

The passage in context is as follows:

In the seventh conversation edited by Professor Khoury, the emperor touches on the theme of the holy war. The emperor must have known that surah 2, 256 reads: "There is no compulsion in religion". According to the experts, this is one of the suras of the early period, when Mohammed was still powerless and under threat. But naturally the emperor also knew the instructions, developed later and recorded in the Qur'an, concerning holy war. Without descending to details, such as the difference in treatment accorded to those who have the "Book" and the "infidels", he addresses his interlocutor with a startling brusqueness on the central question about the relationship between religion and violence in general, saying: "Show me just what Mohammed brought that was new, and there you will find things only evil and inhuman, such as his command to spread by the sword the faith he preached". The emperor, after having expressed himself so forcefully, goes on to explain in detail the reasons why spreading the faith through violence is something unreasonable. Violence is incompatible with the nature of God and the nature of the soul. "God", he says, "is not pleased by blood - and not acting reasonably is contrary to God's nature. Faith is born of the soul, not the body. Whoever would lead someone to faith needs the ability to speak well and to reason properly, without violence and threats... To convince a reasonable soul, one does not need a strong arm, or weapons of any kind, or any other means of threatening a person with death...".[1]

The speech brought a swift response from Muslims around the globe who were angry at what they percieved were offensive words and demanded an apology from him.[2] In Gaza, Palestinians took to the streets in protest, setting ablaze seven churches over the weekend following the lecture.[3] In Iraq, a Christian was killed in Baghdad and posters were placed in mosques from a group calling themselves "Kataab Ashbal Al Islam Al Salafi," (Islamic Salafist Boy Scout Battalions), threatening to kill all the Christians in Iraq if the Pope did not apologize.[4] And in Somalia, a 65 year-old Italian nun was shot dead in what was most likely a revenge attack.[5]

Since his speech had been intended to bridge divides between people of different religions, it is likely he was not prepared for the response he received.

The declarations from the Pope are more dangerous than the cartoons, because they come from the most important Christian authority in the world.[6]

Diaa Rashwan, a Cairo-based analyst of Islamic militancy, 2006
We urge you Muslims wherever you are to hunt down the Pope for his barbaric statements as you have pursued Salman Rushdie, the enemy of Allah who offended our religion. Whoever offends our Prophet Mohammed should be killed on the spot by the nearest Muslim. We call on all Islamic Communities across the world to take revenge on the baseless critic called the pope.[7]

The Malaysian Prime Minister expected the Pope to take full responsibility for any violence that might have been incited by his speech:

The Pope must not take lightly the spread of outrage that has been created. The Vatican must now take full responsibility over the matter and carry out the necessary steps to rectify the mistake.[8]

What this leader was implying is that violence incited by negative remarks about Islam are justified and the speaker is completely responsible for any violence committed by angry Muslims. However, if Islam truly is a religion of peace and tolerance, then insults against it would not inspire violent retaliation.

And here we see the blatant denial of facts regarding Islamic expansion:

This is all a lie ... Islam is far from terrorism and was spread only through the conviction of peoples who saw the good and justice of Islam.[9]

People who suggested [Islam] was a violent religion only gave extremists more cause for hate.[10]

The Pope attempted to appease the Islamic community by apologizing to Muslims for his 'offensive' speech:[11]

...The Holy Father thus sincerely regrets that certain passages of his address could have sounded offensive to the sensitivities of the Muslim faithful, and should have been interpreted in a manner that in no way corresponds to his intentions.

Indeed it was he who, before the religious fervour of Muslim believers, warned secularised Western culture to guard against "the contempt for God and the cynicism that considers mockery of the sacred to be an exercise of freedom".

In reiterating his respect and esteem for those who profess Islam, he hopes they will be helped to understand the correct meaning of his words so that, quickly surmounting this present uneasy moment, witness to the "Creator of heaven and earth, Who has spoken to men" may be reinforced, and collaboration may intensify "to promote together for the benefit of all mankind social justice and moral welfare, as well as peace and freedom' (Nostra Aetate no. 3).[12]

When the Pope visited Turkey two months later, more than 25,000 Turks protested in the streets displaying posters such as "Jesus is not the Son of God. He is a Prophet of Islam," and "The true religion in the sight of Allah is Islam."[13][14]

His visit was marked by increased security due to threats against his life. Naval units were to patrol the Bosphorus armed with machine guns after warnings to police and security services that the life of Benedict XVI might be threatened by Islamic extremists.[15]

Whatever appeasement the papacy had attempted with the 2006 apology, seems to have been put aside when, in 2007, his aide warned about the influence of Islam. He defended the Pope's 2006 speech and said that the pontiff had been attempting to "act against a certain naivety".[16]

Attempts to Islamise the West cannot be denied. The danger for the identity of Europe that is connected with it should not be ignored out of a wrongly understood respectfulness.[16]

Two years later, the Pope visited Jordan and raised Muslim ire again when he did not apologize once more for the speech he had made in 2006.[17] The same occurred amid the 2012 "Innocence of Muslims" controversy, when the Qatar-based International Union of Muslim Scholars accused the pope of fueling "sedition" between Muslims and Christians and demanded another apology for the remarks he made in 2006, in a statement coinciding with the start of the pontiff's three-day visit to Lebanon.[18]