Diacritical Marks of the Qur'an 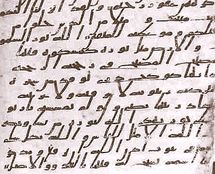 In this article we examine the use of diacritical marks and the problems they posed when they were added to the Arabic Qur'an.

We would like to enlighten our readers on grammatical problems in the Arabic Qur'an, mainly diacritical marks. The Arabic writing system was still in development during the time of Muhammad, so the Qur'an was originally written without today's diacritical marks. These were added years after the final Qur'anic revelation and Muhammad's subsequent death. The problem with this is the addition or subtraction of diacritical marks radically alter the meaning of Arabic text, thereby potentially altering Allah’s book.

The Addition of Diacritical marks

As we stated earlier, the Qur'an was written without diacritical marks. At the time of Muhammad, Arabic orthography was yet to develop into what we have known for centuries. There was no distinction between letters of the Arabic alphabets of similar shape and there were no vowel marks. There were no dots above or below the letters either. For the interpretors who added diacritical marks, to read the Qur'an as it was originally written, would lead the reader to interpret and choose for themselves from the many possible meanings available in the Arabic without diacritical marks.

In order for non-Arabic speakers to understand what is being discussed here, we will look at several Arabic words and how the use of diacritical marks affect their meanings:

The word for “girl” is “bent” (بنت). The word is composed of three letters which are “Ba” (ب), “n” or noon” (ن), and “Ta” (ت). When these three letters are connected to each other without diacritical marks they will appear identical. They will look like three adjacent crescents facing upwards (بنت without dots). The difference between them is nothing. Only the diacritical marks (and the dots) can differentiate between them. Here is how it works:

Therefore, there are a multitude of possible alternatives that could arise from the arrangements of diacritical marks on each of the letters (تتث, نتت, تنث...).

Furthermore, if you put one mark below the first, two points below the second, and two above the third, the word "girl" (بنت, bint) will become “Bayt” (بيت) which translates as “home” in English.

In order to better understand the meaning of this, we will quote Ibn Kammuna, a native Arabic speaker:

I do not think an English reader will appreciate how big a problem this is without solid examples. Let me give a couple of examples. Take two Arabic words like “Sami” and “Shami”. The two words are written in Arabic the same way except for one minor thing: the word “Sami” has no dots on top of the letter “S” (س). the word “Shami” has three dots on the same first letter (ش). So the difference between the two words is just three dots on the first letter. Now, the difference in meaning is huge. The word “Sami” in Arabic can be a man’s name, but also means “High in position”. A man with “Sami” morals means a man with high moral values. The word “Shami”, on the other hand, means “Syrian”, or someone from “Sham” (could mean the from the city of Damascus, or from the country of Syria). Here is another example: take the word “Hal” in Arabic (with "heavy H" ح). It mean “situation”. In contrast, the word “Khal” may mean “Empty” or “Uncle-on the mother’s side”. Now the difference in writing in the Arabic language between the two words is just one dot on top of the first letter (خ) in the word “Khal”. The word “Hal” is not dotted at all. You see, one dot difference can make a huge difference in the meaning of the word in the Arabic language. This huge Qur’anic problem cannot be appreciated by an English reader without live examples. I tried to clarify this matter in the two examples I just mentioned.

As if this is not enough, vowels presented another problem for the Muslims. Arabic script is consonantal. Vowels influence the meaning in the Arabic language. They are represented by orthographical signs above or below the letters. So, after settling the problems associated with consonants, Muslims had to decide on which vowels to employ in each case where there is a wording issue. Using different vowel renders a different meaning!

The above problems eventually led to the growth of different centers with their own traditions on how the Qur’anic texts should be pointed and vowelized. So, it is clear that Uthman did not succeed in getting rid of the older Qur’anic codices. Charles Adams observes about the Qur’an:

…far from being a single text passed down inviolate from the time of ‘Uthman’s commission, literally thousands of variant readings of particular verses were known in the first three (Muslim) centuries. Theses variants affected even the ‘Uthmanic’ codex, making it difficult to know what its true form may have been.”[1]

In the book "The History of Islamic Law", the author Dr. Ahmad Shalabi, professor of Islamic history and civilization states:

The Qur’an was written in the Kufi script without diacritical points, vocalization or literary productions. No distinction was made between such words as ‘slaves’, ‘a slave’, and ‘at’ or ‘to have’, or between ‘to trick’ and ‘to deceive each other’, or between ‘to investigate’ or ‘to make sure’. Because of the Arab skill in Arabic language their reading was precise. Later when non-Arabs embraced Islam, errors began to appear in the reading of the Qur’an when those non-Arabs and other Arabs whose language was corrupted, read it. The incorrect reading changed the meaning sometimes.[2]

According to Ibn Taymiyyah in "Sheik of the Muslims", Muslims began using diacritical marks because reading errors began to appear:

The companions (Muhammad’s friends or “Sahaba”) did not vocalize or provide diacritical points for the letters of the Qur’anic copies which they wrote, but later during the last part of the companions’ era, when reading errors came into being, they began to provide diacritical points for the copies of the Qur’an and to vocalize them. This was admissible by the authority of the majority of the scholars, though some of them disliked it. The truth is, it should not be disliked because the situation necessitated it, and the diacritical points distinguish the letters from each other while vocalization explains the grammatical inflection.[3]

This means more than one reading was accepted by Muhammad.

Al-Suyuti makes an important statement in which he says that the differences in reading has led to differences in Islamic law.[5] He illustrated this by the following example: He indicated that some scholars demanded of the worshiper that he wash himself again (perform ablution) before he prays if he shook hands with a woman. Yet other scholars require him to do so only in the case of sexual intercourse and not just because he shook hands with her or touched her hand.

The reason for this disagreement is because of the word لَٰمَسْتُمُ (laamastum) found in the Chapter of Women (verse 43) and whether it has a long vowel a or not. Scholars Jalalayn and Badawi record that both ibn ’Umar and al-Shafi’i seriously disagree with ibn ’Abbas [6] in the way they interpret this verse because ibn ’Abbas insisted that the meaning intended here is actual intercourse while the former said no, it is enough for a man to touch the skin of a woman or her hand to require having his ablution (washing) repeated.

In addition to the diacritical marks, there are other forms of vocalization marks that change the pronunciation and meaning of a given word. These marks include Damma, Fathha, kassra, shadda, scoon, madda, etc. They are put above or below the letter to affect its pronunciation.

Due to diacritical marks not being included in the original Qur'an and their use being so complex, and also because Muhammad allowed for more than one reading of each word, it is difficult to determine the original meaning of the text. Through the abundance of opportunities to make mistakes it is likely true that the Qur'an has been altered or at least its specific form forgotten and that the version we have with us today is not Allah’s word to the letter, as many claim.