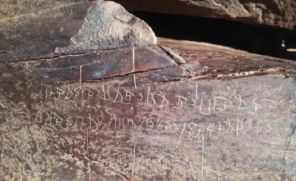 A Pre-Islamic basmala found in Yemen in 2018 and written in South Arabian Script. Right-to-left, the top line reads "bsmlh rḥmn rḥmn rb smwt", which has been interpreted as "In the name of Allāh, the Raḥmān have mercy upon us, O lord of the heavens"[1]

According to Islam, Allāh is the creator of the universe. In the pre-Islamic era, the Quranic mushrikeen worshipped Allah as the supreme creator god, along with one or more lesser deites. A number of pre-Islamic gods and godesses are named in the Quran, for example Allāt (the feminine form of “Allah”, meaning 'the goddess' ),[2][3][4] Manāt, and al-‘Uzzá were Allah's daughters. One of the Five Pillars of Islam is to accept that Allah is the only God (Arabic: la ilaaha il Allah)[5][6]

Twenty-first century academic scholarship has considerably transformed our understanding about the history of the name Allah, his worship in Arabia, and the beliefs of the mushrikeen who are mentioned so often in the Quran. This progress has largely been made thanks to archaeological and epigraphic expeditions to Arabia to learn more about the history of the language, scripts and beliefs of Arabia in the centuries before Islam.

God is a deity in theist and deist religions and other belief systems, representing either the sole deity in monotheism (e.g. the Judeo-Christian Yahweh), or a principal deity in polytheism (e.g. the Hindu Brahman). God is most often conceived of as the supernatural creator and overseer of the Universe.

History of the name Allah and the Basmala

The Book of Idols by Hisham ibn al-Kalbi (d. 819 CE) is a series of distantly remembered folk tales describing the outright idolatry of the pre-Islamic Arabs, with an overall narrative that this came to an end with the rise of Islam. Academic scholarship today recognises this as a false narrative, serving to bring the immediately pre-Islamic period into a sharper contrast with Islam.[7][8] Our understanding of the religious landscape in pre-Islamic Arabia is being transformed by the study of epigraphic evidence (inscriptions on rocks, rock art, and their archaeological contexts), complemented with careful study of Quranic internal evidence and early Islamic sources, independent of later histographic works.

From the fourth century CE, pagan deities almost completely disappear from the epigraphic record of the South Arabian script family, commencing what is known as the monotheistic period in that part of Arabia. In their place, a single god, Rḥmnn (literally, The merciful) starts to appear, which eventually becames the Quranic epithet al-Rahman (more on this below).[9] The use of Rahman (or Rahman-an) becomes truely monotheistic only in the sixth century CE, previously used in a monolatric context (the sole object of worship, even while other deities are acknowledged). The Quran has a chronological progression in the use of theonyms, with Rabb (Lord) in the earliest phase, then al-Rahman, and later an almost exclusive use of the name Allah.[10]

The word Allah first appears in the epigraphic record as the name of one of many Nabataean deities in 1st century BCE or 1st century CE northern Arabia.[11] The word possibly might have come from a contraction of al-ʾilāh (the god), though there are some linguistic difficulties with this idea. In any case it was the name of a deity at that time and there is no indication that it was associated with the monotheistic Judeo-Christian god. The name Abd Allah (like the name of Muhammad's father) first appears in a Nabataean pagan context (they used the same construct also for other gods, for example ʿAbdu Manōti, "servant of Manāt"). In Safaitic inscriptions (a script used in the north Arabian desert), the name Allah is occasionally invoked, though other deities much more so. By the sixth century CE the name Allah is applied in a monotheistic context around the Hijaz and at some point merges with the Christian al-ʾilāh (the god). Allah appears equated with al-Rahman (who in the south was associated with the Judeo-Christian God) in a pre-Islamic basmala inscription discovered in Yemen, as discussed in the next section below.[12]

The Islamic bismillah, "In the name of Allah, the Beneficent, the Merciful" (Bismillah Ar-Rahman Ar-Raheem), is recited before the start of each surah and begins the al-Fatiha prayer. Within the surahs themselves, it occurs once only, in Quran 27:30.

In 2018 the first known pre-Islamic Basmala inscription was found on the side of a cliff in Yemen, reading "In the name of Allah, Rahman; Rahman lord of the heavens". Writing about the discovery, Ahmad al-Jallad, who is renowned for his work on the languages and writing systems of pre-Islamic Arabia, observes that Al-Rahman was originally a distinct deity to Allah, and not a descriptor of him. Maslamah, a Yemenite rival prophet to Muhammad, worshipped al-Rahman, the deity of ancient Himyar. Al-Jallad proposes that the basmala was used to synchronize the two monotheistic poles of Arabia, Allah in the north (where other deities completely disappear from the epigraphic record by the sixth century CE) with al-Rahman in the South. This equivalence was probably introduced during the Himyarite northward excursions in the sixth century. This regional difference is echoed in Quran 17:110. Ar-Raheem (the merciful) would then be an Islamic innovation appended to al-Rahman of the pre-Islamic Basmala which by then had come to represent an adjective describing Allah. [13] This pre-Islamic basmala and many other pre-Islamic inscriptions bear similarities with phrases and terminology found in the Quran.[14]

Beliefs of the Quranic Mushrikeen

Historian Patricia Crone in a detailed article on the Quranic mushrikeen pointed out that they believed in Allah as the Judeo-Christian creator god, but associated with him one or more lesser partners, usually described as gods but sometimes his offspring, and that he took female angels for himself. Sometimes these gods are named, most of which have also been found in rock inscriptions. The mushrikeen also believed in jinns and demons, and some worshipped heavenly bodies. Ahab Bdaiwi adds that only rarely is outright paganism found of the kind described in later sources (like Ibn al-Kalbi).[15][16]

Tawheed (also spelled tawhid) is the Islamic monotheistic concept of god. Although the concept of monotheism is intrinsic to tawheed, tawheed encompasses more than the concept of god simply being one. It also refers to all of the implications of the existence of one god who created the universe and has very specific wishes for his creations. It stands in contrast to shirk in all of its forms.

The earliest Islamic school of theology was formed by the Mut'azila, who applied a rationalist approach to understanding the Quran. In their view, Allah's attributes (including Quranic references to body parts) were to be understood metaphorically. For example, God's 'hands' are his blessing, God's 'eyes' are his knowledge, his 'face' is his essence and his seating himself on his throne is his omnipotence. When Quran 75:22-23 says that on the day of resurrection the believers will "see" Allah, the Mut'azila said they will see him with their hearts. In contrast. Al-Ash'ari (d. 936 CE) who founded the most dominant school of Islamic theology disgreed strongly with the Mu'tazila, arguing that rather Allah's attributes are real and believers will see him with their eyes on the day of resurrection, though his body is not like a human body and it is not possible to rationally understand what is meant by such verses in the Quran. Maturidi's (d. 944 CE) doctrines were similar to al-Ash'ari with subtle diffences, in this case that the believers will see Allah with their eyes but not comprehend him, and that when the Quran said Allah sat upon his throne this had to be taken as literally true.[17][18]